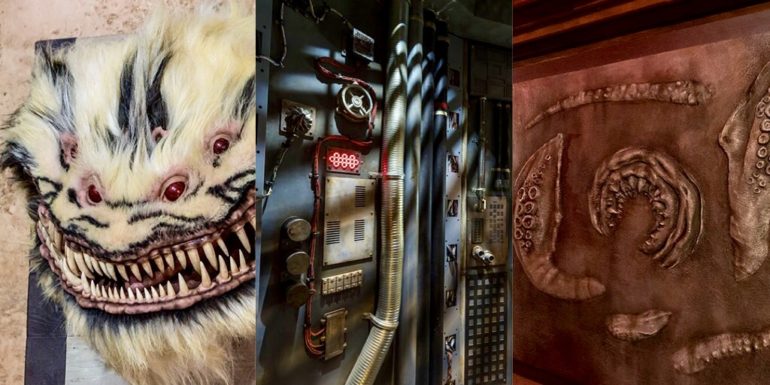 If you’re tired of swooping vistas of Black Spire Outpost in Star Wars: Galaxy’s Edge, or you just simply need more to tide you over before the official opening of the land, D23 has just released a set of detailed shots of specific props and scenes throughout the land filled with fun Easter eggs that Star Wars fans both new and old will appreciate. There are references to all three trilogies, and even Star Wars series like Clone Wars and Rebels. Check out all the shots below and let us know which ones are your favorites!

Ancient inscriptions line the walls of Batuu, yet they’ve endured years of war and resistance.

Here’s another look inside the Millennium Falcon.

A wall displaying a number of trooper helmets and weaponry throughout the ages.

Star Wars Rebels fans will love the inclusion of these Meiloorun fruit, which are Hera’s favorite.

Here’s one of the three trailer-sized cargo pods that Strono Tuggs is off-loading from his multi-purpose transport into the hangar bay at Docking Bay 7 Food & Cargo. The first is stamped with the number 77, the second one (which is seen here, dangling from cables through the roof’s opened portal) is marked 80, and the last one (which is still aboard Tuggs’s Grub) is branded 83. These are the years that the films of the original Star Wars trilogy came out.

Here we have a wall of creature busts. (I may or may not need that Tauntaun bust for my living room.)

Probably one of my favorite inclusions is this right scene right here. Look familiar? That’s because this is the same spot where Han and Leia kiss in Empire Strikes Back. Cast Members may need to monitor this space… somewhat closely.

Some more wall inscriptions, this time in Aurebesh.

Sure to become the next big Instagram wall, this Rathtar impression on the walls of the Millennium Falcon is rather impressive.

We love the attention to detail on some of these altar-like spaces, here with an impressive, antique-looking bust of Ahsoka, or possibly another Togruta warrior.

Here, kitty, kitty. I’m far more excited for Loth cats, but for now, this magnificent bust of a Nexu will suffice.

As if we couldn’t be more excited about Star Wars already. What are you most looking forward to seeing in person? Let us know in the comments!