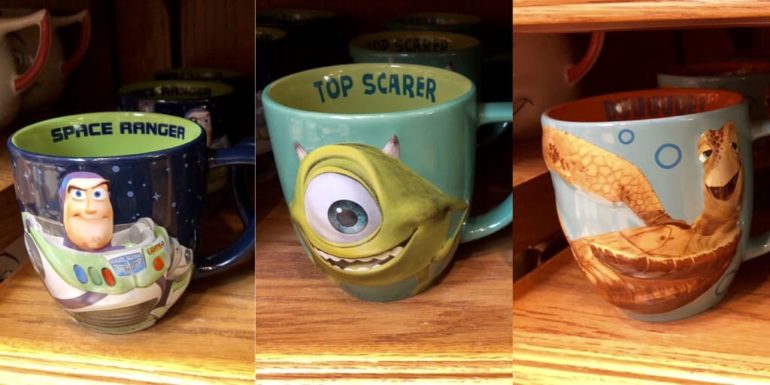 Whether you’re looking to scare up a hot beverage or looking to fuel up before you head to infinity and beyond, you can sip your drink with some Pixar pals in a new line of mugs. We spotted these at Atwater Ink and Paint Art Supply on Buena Vista Street at Disney California Adventure.

Each mug costs $16.99 and has a small phrase in the interior. Above, Monsters, Inc.‘s Mike Wazowski is featured with the phrase “Top Scarer.” It’s perfect for that morning “eye-opener!”

If you’re looking to celebrate the oldest (and the newest) Pixar film, Toy Story‘s Buzz Lightyear is featured with the Star Command logo and the phrase “Space Ranger” on this mug. (Sadly, there’s no “Mrs. Nesbit” variant.)

But perhaps you’re ready to fight the forces of evil… or you just want a big mug of milk for dunking cookies into. For that, you can enjoy this mug with The Incredibles‘ Jack-Jack on it, including the phrase “Num Num Cookie.” (Hey, maybe you can bring it over to Pixar Pier for a light snack!)

And finally, you can go with the flow with this mug featuring Finding Nemo‘s Crush and his catchphrase, “Duuuude!” This is a totally sweet mug perfect for anyone who wants to just chillax or ride the current of the EAC! (That’s East Australian Current, for those not in the know.)

Which is your favorite mug in the set? What Pixar character would you like to see on a mug next? Let us know in the comments below!