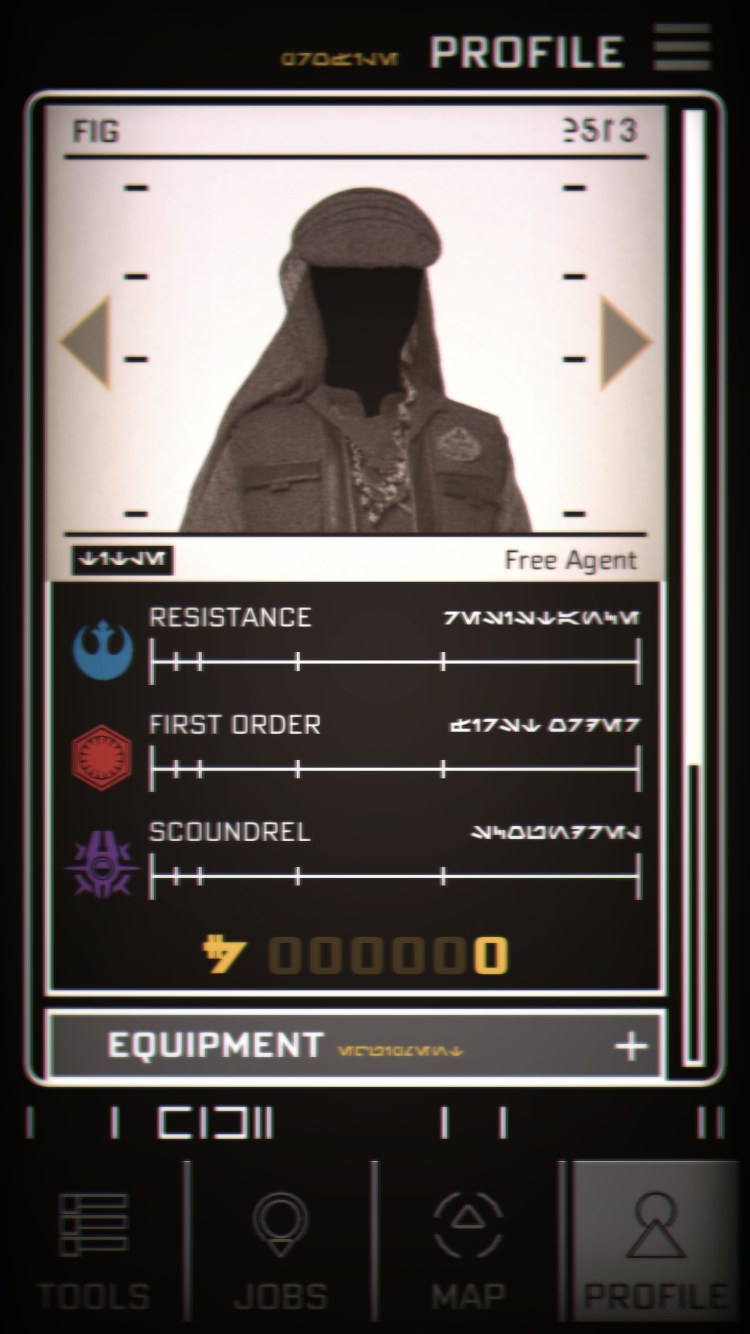 While many details have been released about the Star Wars: Galaxy’s Edge Galactic Datapad within the Play Disney Parks, beyond a cute little interactive map, there isn’t much we’ve been able to do on there… until now.

A recent update to the app has added the full Star Wars: Datapad experience, as well as an in-queue experience for the Millennium Falcon: Smugglers Run attraction.

If you take a look at the map, you can see a new “New Game!” bubble pop up as you peruse the land.

Clicking through will lead you to the Star Wars: Datapad page, where you can play with up to 5 friends linked on your My Disney Experience profile. And speaking of profiles…

You can now access your Datapad profile from the app! As someone who’s never even used much of the Play Disney Parks app, this alone blew me away. There are so many little details, and while certainly busy, the interface feels really immersive.

From your profile, you can scroll down to various drop-down menus, starting with Equipment, which includes a selection of outfits, weapons, cargo, and parts and scraps to choose from to customize your experience. Within the outfits section, you can choose what side you want to be on, be it Rebel pilot, scavenger, undercover Jedi, or even a Cloud-Rider pirate like Enfys Nest. As the app guides you along, you’ll have the chance to pledge your loyalty to the First Order, support the Resistance, or strike out on your own as a scoundrel.

Weapons include Rey’s NN-14 blaster pistol, Chewbacca’s Bowcaster, and much more. You can discover these digital goods as you scan objects all around the spaceport—including items hidden inside space-shipping crates and containers.

Moving on to Star Maps, these refer to areas within the galaxy, including the Interior, New Territories, and Western Reaches, which is where a planet like Jakku would be located.

The Schematics section includes your choice of ships, from the Millennium Falcon to Luke’s X-34 landspeeder. With each job you complete, you’ll receive digital rewards like ship schematics, star maps, and in-game galactic credits.

Droid Data will apparently house various memories of various astromech droids. You can use the Play Disney Parks app to hack into the land’s many devices, control panels, and droids. The app allows visitors to engage with some of the full-scale droids rolling around the village, which will help them learn more about the word on the street and who is looking for help. (Do keep in mind, however, that these roaming droids may not be out in the land until much later, due to the immense number of crowds that are expected to befall upon Black Spire.)

Under the Transmissions section, you can tune into communications sent by the planet’s many residents to uncover stories and secrets throughout the land, including Life in the Outpost, Dok’s Den Dealings, and Debts to Oga. You can also unscramble transmissions being sent from far, far away.

It also appears you can earn a variety of titles within the land. There will be points and rewards for completing tasks, adding heft to your digital Star Wars profile.

If you’re running low on juice (no, not Meiloorun juice) and want to save on battery power, there’s a handy Power Saver mode on the Datapad that turns off some of the weathered digital effects on the screen. It also makes it easier to see, if you’re looking for a cleaner app look.

Datapad features like Map, Jobs, and Tools are only activated with location tracking once you’re actually in Star Wars: Galaxy’s Edge, so we’ll have to wait and see what those are like until the actual opening, but until then, I’m happy pointlessly tinkering around with my Free Agent profile.

Download the Play Disney Parks app today and take a look at your very own Star Wars: Datapad profile!