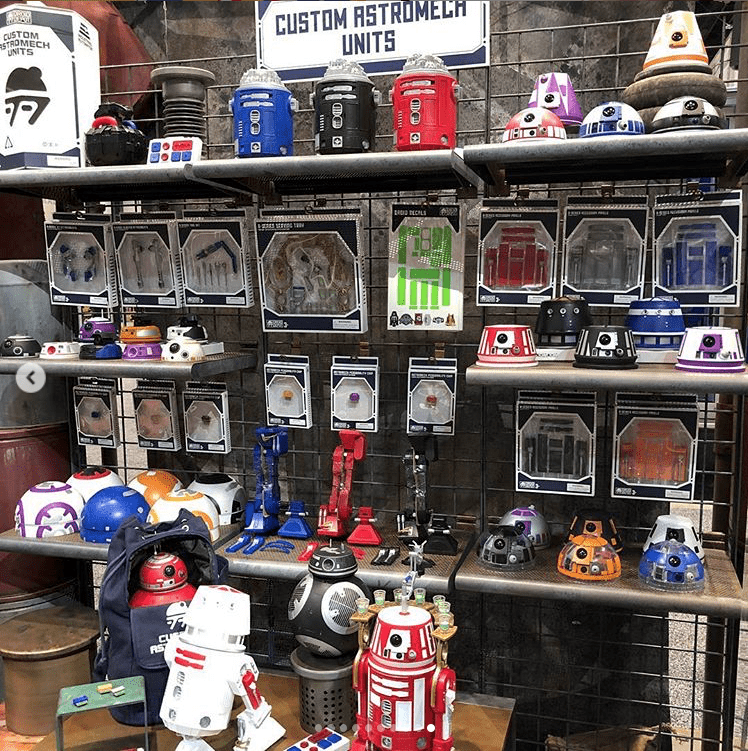 It’s only a matter of hours before the media embargo lifts on all things Star Wars: Galaxy’s Edge, so ahead of the social media flood, we decided we’d delve into another highly-anticipated interactive merchandise component of the land. We’ve gone over the ins and outs of custom lightsaber building at Savi’s Workshop, but let’s take a closer look at custom astromech droid building at Droid Depot.

Spending a relaxing day on the couch with BB-P19. I’m working on Star Wars @cozyconecrafts orders AND answering ALL of your Star Wars Galaxy’s Edge questions in my stories! Leave a question in the box if you have one! #starwarsgalaxysedge #SWGE

Custom droid building is sure to appeal to the whole family (or conversely, you could potentially start your own family of droids.)

Just had the chance to spend some time in #StarWarsGalaxysEdge and I built and adopted a new family member. His name is Charlie and he’s a little stinker. #StarWars #Droid #DroidDepot #BBUnit #Disneyland #GalaxysEdge

Besides just cooing over cute astromech units, it’s worth noting that many of these posts shed light on many logistical aspects of the experience. Just dig through the comments. Instagram user @andydigenova mentioned that the Depot was actually out of R-units, so do keep in mind that there’s a possibility you might not get the droid you are looking for.

I went to Batuu and I came back with a new BaBy droid unit! 💜✨ I’m very grateful to have had a second opportunity to travel to the spires and experience more of what I missed on Friday. . . 🚫WARNING – EXPERIENCE SPECIFIC INFO TO FOLLOW – SKIP IF YOU’RE TRYING TO PASS ON INFO🚫 . . The droid depot is a unique experience where you get to build a BB-unit or R-unit. There are many different color options and even head options for both! The BEST part is, you also get to purchase a personality chip for your droid. You get to decide if your droid is first order, resistance or smuggler. Naturally, my BB is First Order. The depot has a work station where you get to build your droid and then go through the magical process of bringing it to life! While he is kind of hard to “drive” the Bluetooth interactions he has in the land with other droids or other areas of the park are AMAZING! . . ❓So now the question is, what do I name this no name BB?! I bumped into Rey and she was trying to help me come up with a name, but when I disclosed he was First Order, she said she could no longer trust me and walked away. 😂 . . Hopefully I’ll come up with something clever soon! #starwarsgalaxysedge #droiddepot #firstorder #SWGE #starwarsland

Instagram user @ivieanne points out the three personality chips that were currently available during previews: First Order, Resistance, or Smuggler. Also, while custom droids use Bluetooth technology to communicate with other astromech droid units as well as certain other elements and objects on Batuu and at Disney Parks and Resorts, it seems connectivity within the land can be unreliable at times.

@starwars #starwarsgalaxysedge is going to be amazing. Here’s some pics of the #DroidDepot merchandise that will be available in the parks. #R2D2 #R2 #StarWars #GalaxysEdge @waltdisneyworld @disneyland @starwarscelebration @disneyparksblog

Each droid stands roughly 18 inches tall and is battery-powered (AA and AAA) and remote-controlled. Controllers can also trigger accessories which can be added on to droids, like blasters and mock tools. A closer look back at the full merchandise display from Star Wars Celebration in Chicago acts as a refresher as we get ready to head into the land.

As it states on the Disneyland website, each build ($99.99) includes the following:

An additional set of accessories and attachments are also available at an additional cost, including this R-Series Serving Tray so you can make your R- unit emulate R2-D2 in Return of the Jedi.

One interesting thing to note, particularly amongst BB- units, is the concerning number of videos showing them falling apart mid-roll. This may have to do with the sheer weight of the main body of the droid. Having their little heads pop off was also a common issue with the larger Sphero models also used in Droid Racing aboard the Disney Cruise Line during Star Wars: Day at Sea events, so perhaps this is just something that isn’t transferring over well from movie designs.

According to our readers, there are two chip options for each personality category for a total of six options available (but specific chips may or may not be out of stock during your reservation time.) The interesting thing to note is how the droids will respond when they’re out in the land. For example, if a Smuggler droid is within the Merchant Row area, it’ll beep and boop with excitement. Similar concepts apply to the First Order and Resistance-chipped droids. A Youtube video by The Dan-O Channel explains these accessories more in-depth:

Unlike Savi’s Workshop, Droid Depot will also sell a variety of other droid figures and toys, including the infamous DJ-R3X figure we love so much.

Themed patches, keychains, and more will also be available.

Unlike Oga’s Cantina and Savi’s Workshop, extensive lines haven’t been common at Droid Depot, so it’s likely you’ll get your chance to build during your 4-hour reservation, but do keep in mind that these DIY sessions do take time. As mentioned above, also keep in mind that, despite Disney having years to prep for this experience, quantities of even basic merchandise items, including items necessary for this experience, are limited and may sell out during your time there. Like Savi’s, the option to purchase other personality chips can unlock even more fun. Most importantly, if you build and adopt your droid, make sure you keep a close eye on it so it doesn’t get into any mischief.