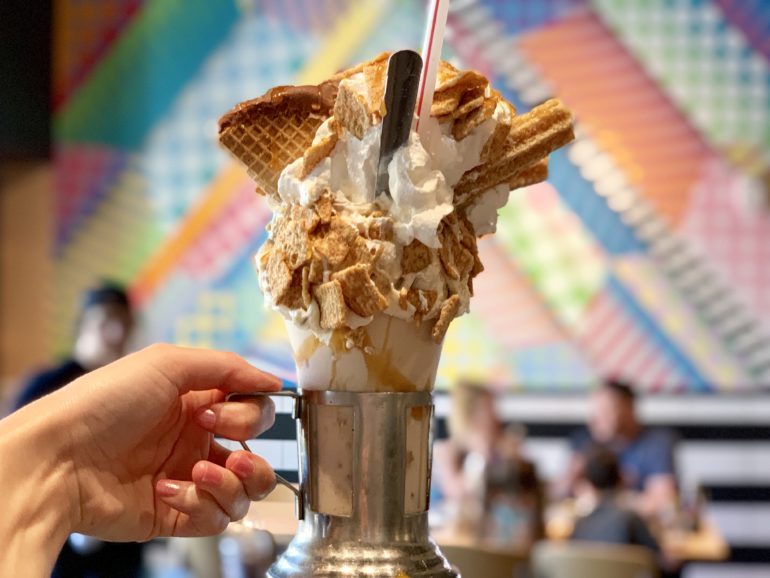 Last weekend, Black Tap Craft Burgers & Shakes finally opened in Downtown Disney at the Disneyland Resort. We reviewed several items from the menu, including two CrazyShakes: The Cake Shake and Sweet ‘N Salty Shake. Now, for the first time in two years, Black Tap has added a new permanent CrazyShake to their menu: Churro Choco Taco Shake. This shake is beautifully put together and over the top. But how does it taste? We’re here to give you our honest review of this new addition.

As pretty and Instagrammable as this shake is, we found it to be quite disappointing. The shake itself was actually really good. It had a very present churro taste, but it wasn’t overly sweet. And we really loved the bit of Cinnamon Toast Crunch mixed in.

However, the choco taco and two churros were far from delicious. The churros were so stale that I actually wanted to spit out the bite I took, but I refrained so as not to be rude. They were so chewy that I couldn’t even focus on whether they actually tasted good or not. Same goes for the choco taco. The waffle taco was stale and chewy, so I didn’t bother eating it after two bites. And trying to get to the choco taco was chaos. So much whipped cream and cereal were piled on top, and I made a huge mess at the table trying to pry the taco out.

Overall, we wouldn’t recommend this Churro Choco Taco Shake. Again, the actual shake part is great, but the toppings make this a waste of money. If they can find a way to make the two churros and choco taco fresh, then we would love to go for this shake again.