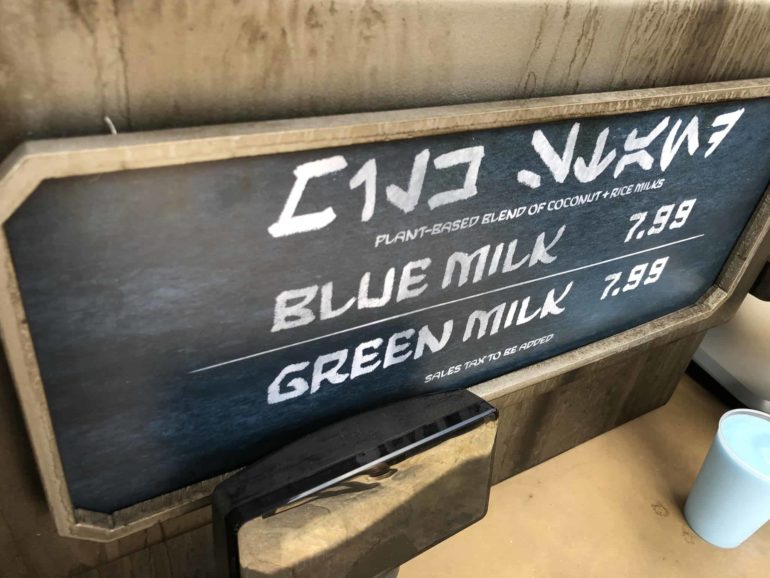 Greetings from Black Spire Outpost! Since the first Star Wars film premiered in 1977, there’s been a sort of mystique around the blue milk seen in A New Hope. What would it taste like? Well, we finally found out thanks to the Milk Stand at Star Wars: Galaxy’s Edge in Disneyland. Here, the blue and green milks are made with “a frozen plant-based blend of coconut and rice milks.” So, was it worth the wait? Let’s find out!

FIrst off, I’m okay with Blue Milk, but I still don’t understand why they made both options plant-based. Disney’s clearly struggling to nail down a signature specialty beverage. Disney’s initial attempt at Butterbeer was LeFou’s Brew, and they clearly tried again with these “milks”, but they missed the mark. Why? Well, it all boils down to taste… and in this case, texture. They should’ve made at least one option a dairy option for people who aren’t used to plant-based concoctions.

If you’re looking to milk (sorry) your time inside Star Wars: Galaxy’s Edge, be aware that Mobile Ordering is available at the Milk Stand. We were also promised a Bubo Wamba Family Farms Novelty Drink Vessel, but that has yet to pop up in the land.

Be sure to check out starwars.wdwnt.com for all the latest information about Star Wars: Galaxy’s Edge. May the Force be with you!