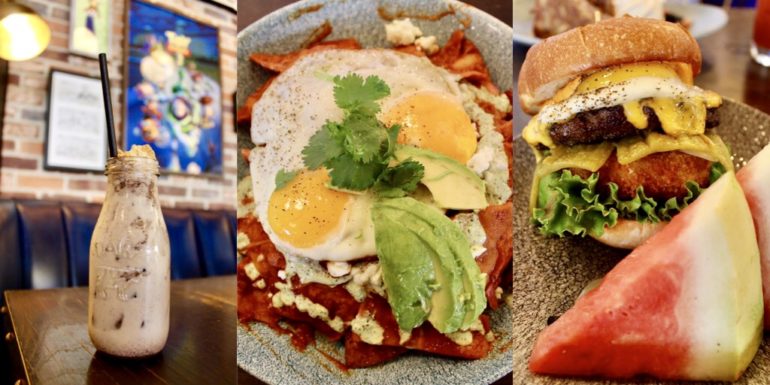 Lamplight Lounge debuted its long-awaited brunch menu this weekend and we were there to try some innovative new dishes at the famed Pixar eatery. If you’ve never been to Lamplight Lounge, it’s a table service restaurant at Disney California Adventure that features playfully presented food, a full bar, and panoramic views of Paradise Bay from both floors.

Renovated from an old warehouse factory, guests are surrounded by a trove of Pixar treasures like concept art, napkin sketches, knick-knacks, collectible toys and other mementos “left behind” by the filmmakers. But enough about the surroundings. Let’s get into brunch.

The new brunch menu is served on Saturdays and Sundays from 8:15 AM to 12:00 PM, making it the perfect place to drop in before heading to the parks, regardless of whether you choose to sleep in or not. We’ll start with the beverages and move on to the brunch entrees.

Simply put, this cocktail is sheer greatness. As the name implies, it’s basically alcoholic milk with a dash of cinnamon, topped with Cinnamon Toast Crunch pieces. The attention to detail in the presentation is also nice, with the glass milk bottle being an adorable way to serve this drink.

The Beermosa’s fine. It tastes pretty much like the sum of its parts: orange juice and beer shandy. With a California-inspired menu, there’s some definite inspiration from micheladas.

Speaking of micheladas, the Morning Glory is actually pretty good for a bloody mary. As someone who usually doesn’t like them, this one wasn’t as offensive as most of the ones I’ve tried. Despite the fancy name and ingredient list, however, this is a bloody mary by any other name, and tastes the same to boot.

Despite the fun presentation, the Mimosa Flight is a waste. While the Watermelon Agua Fresca mimosa was quite good, the rest were simply not well made. There was something off in the rest of the mimosas, though, although we couldn’t quite pinpoint what it was.

This may look like the big brunch showstopper, but the French Toast is actually a huge disappointment. It’s practically flavorless, with the actual French Toast component tasting like little more than just plain white bread. The best part about this dish is the Irish Cream whipped cream, honestly. As far as the other components, the berries were fresh, and the almond brittle was adequate… but when the main part of the dish has no flavor, that’s a huge loss already. They should rename this dish to “Brittle, Berries, and Bread” for better accuracy.

Do underestimate this heaping plate of nachos. These chilaquiles are phenomenal. There’s a lot of everything going on here, with tons of spice, and loads of flavor coming through. Best of all, this dish is huge. You could easily share it between two or three people. If you get anything at the brunch, it should be these chilaquiles. If you’re wary, don’t be. The dish isn’t spicy enough to the point of being off-putting. I’d say there’s a medium level of spice, and a lot of flavor.

The Brunch Burger is admittedly one of the better prepared burgers in the park, and it comes truly loaded with toppings like the Potato Skins featured in the appetizer menu at lunch and dinner. The burger is well cooked (to order) and the bun is nice and crispy on the outside while still being soft on the inside. Overall, it’s a good, solid option that’s sure to fill you up. I’m not sure that watermelon was the best pairing here, but all in all, it’s not a bad dish. If you’re averse to spice, the roasted green chilies don’t offer much heat, so don’t let that deter you.

We’ve reviewed Lamplight Lounge time and again and we’re always happy that they’re adding more menus and changing up existing ones. Lamplight is a hard reservation to get, so having the restaurant expand its hours is definitely a good thing. If you decide to experience brunch for yourself, don’t miss out on Cinnamon Toast Cocktail and the Lamplight Chilaquiles.