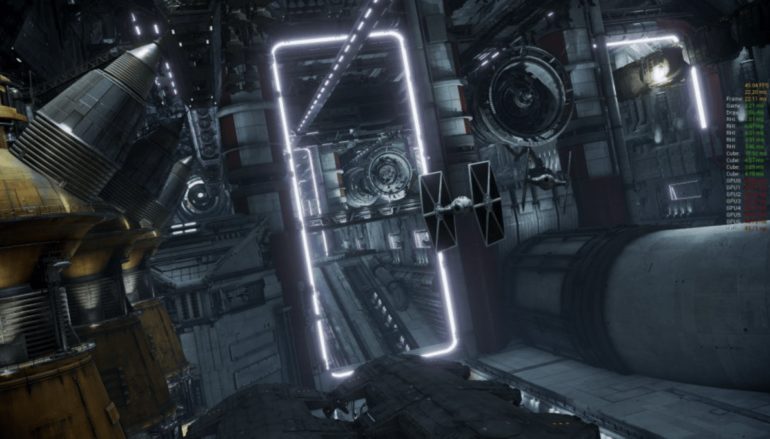 Editor’s Note: A very fortunate traveler to Batuu has reported back from Black Spire Outpost and relayed their experiences to us for the information of future travelers. The following is a recollection of their flight aboard the Millennium Falcon. Your interplanetary mileage may vary.

Other accolades apply, of course; amazing, authentic, transformative, detailed, inspired. They all amount to the same thing. Star Wars: Galaxy’s Edge will be––no, is incredible.

In a mere handful of days, Disney’s eagerly-awaited new land will be opening inside Disneyland Park. Early unveiling has commenced for the few and fortunate. Cast Members and their invited guests can now explore much of Batuu and test ride the one available attraction: Millennium Falcon: Smugglers Run.

Just seeing it is an experience. Following the incredibly creative example of Cars Land, and more recently, Pandora, the new Star Wars scene positively transports you to a movie set far, far away. The level of detail and authenticity drag you into another galaxy. The sights, sounds, and eventually the smells… most guests will never realize that the entire area was once––up until very recently––a backstage maintenance facility.

The attraction itself simply adds to the feeling. Guests wind their way through a convincingly fashioned spaceport for a time until making their way, undeniably, onto the decks of a perfectly-reconstructed Millennium Falcon. True to the brand, the queue is part of the adventure, which is fortunate, as guests will be spending a fair amount of time in it. The queue is insanely detailed, think Flight of Passage at Disney’s Animal Kingdom detailed.

It takes a while to get from the head of the line into a seat on the ride. Part of that is intentional. There are several pre-show segments, and a number of hallways and flight decks. Then, there is the fact the entire area is going to be beset by more humans that can practically fit into any limited space, despite what Disney hopes to alleviate with the novel reservation system.

Once in the captain’s chair, the sense of nostalgia is almost overwhelming. The rumors and fleeting online glimpses are true. The ride itself takes place within a true-to-life Millennium Falcon flight simulator.

Veteran Walt Disney World guests will immediately recognize similarities with the much-beloved Star Tours. I’d say the two experiences are parallel in terms of thrill level. While many would liken this to Epcot’s Mission: SPACE attraction due to flashing interactivity and scripted expectations, you really are in full control of your flight experience with the Falcon. That being said, if you incur damage on your journey, you will see it… and feel it.

Six guests at a time enter the legendary Millennium Falcon cockpit, adopting one of three roles: pilot, gunner, and engineer, and are then arranged into two rows, accordingly. The assignment is not strictly nominal. Should you choose to––and you ought––each flier has a series of duties to fulfill. The captain has certain flight responsibilities, gunners get to shoot at potential targets, while engineers are charged with fixing damage wrought by the actions of the others.

All the while, beyond the segmented flight screen, a dramatic galactic adventure unfolds. It can be difficult to focus upon and properly appreciate the space age creativity, what with all the button pressing and piloting going on. Try to balance your responsibilities with the available passive enjoyment, or you may come to the end feeling as though you have missed something. For those who want a more hands-off experience, there are autopilot buttons in the cockpit. You have the option of just setting them and simply enjoying the ride.

Smugglers Run fulfills a lifelong dream for many to pilot the Millennium Falcon, and the level of detail is above all that has preceded it. This, combined with the variations in each ride, will make this a highly repeatable experience for guests… despite the fact that it’s really just the world’s largest arcade gaming cockpit.

You can always ride Millennium Falcon: Smugglers Run again, and you should. Who knows, though, when you’ll get that next opportunity.