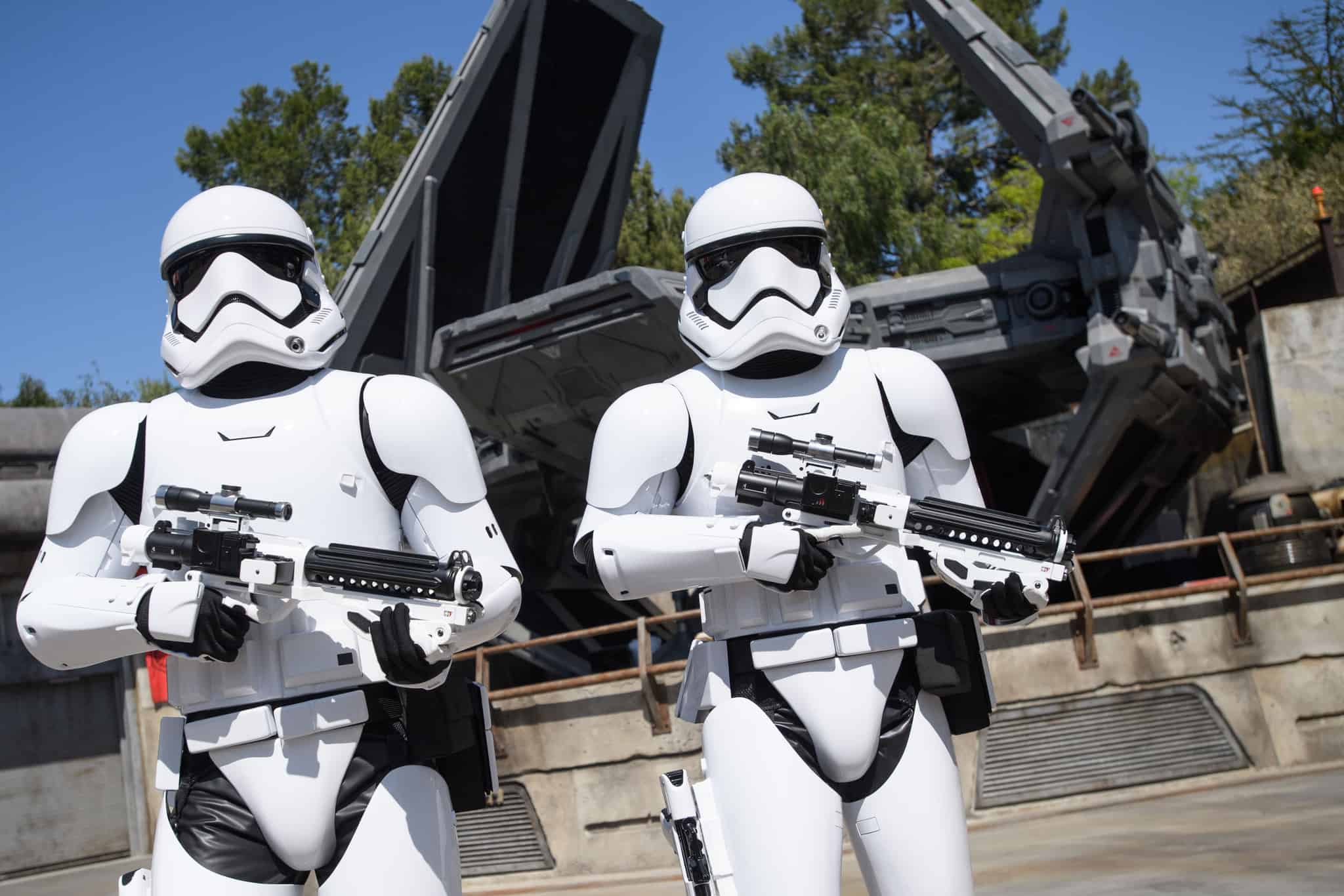 In a recent press release by Disney, creatives from both Walt Disney Imagineering, Lucasfilm, and Merchandise Strategy and New Park Experience Development gave their thoughts about the newest land to arrive at Disneyland Park:

How Star Wars: Galaxy’s Edge Redefines What a Disney Experience Can Be

“Star Wars: Galaxy’s Edge redefines what a Disney experience can be. It invites exploration and discovery, where we can become characters in the Star Wars galaxy. More and more, our guests want to lean into these stories; not just be a spectator. We’re giving them the opportunity to do just that in this land, with a new level of detail and immersion. This is an opportunity to play and engage with your friends and family in a shared experience that will forge lifelong memories.” – Scott Trowbridge, Star Wars Portfolio Creative Executive, Walt Disney Imagineering

At Star Wars: Galaxy’s Edge, Guests Get to Change the Course of the Galaxy

“At the heart of Star Wars: Galaxy’s Edge is this fundamental truth: We all have the power to be a hero, making choices that change the course of the galaxy. Whether you’re a lowly moisture farmer on some remote planet or an orphan sitting in a pile of dirt just trying to scrape by, every individual has the power to change the universe.” – Scott Trowbridge, Star Wars Portfolio Creative Executive, Walt Disney Imagineering

“In designing the Star Wars universe, we don’t consider it science fiction or fantasy – we think of it more as a period piece, and we look at it almost from a documentary point of view. Star Wars design is grounded in reality, and we’re creating a place that is believable, authentic and real. Then we exaggerate that reality and add in a distinct visual vocabulary to turn the ordinary into something extraordinary. For this land, we wanted to create something fresh and also timeless – just like our films.” – Doug Chiang, Vice President and Executive Creative Director, Lucasfilm

“Our goal was to create a place so authentic – so real – that when our guests step inside, they feel like they’re in the movie. To do this, we had to partner with the team at Lucasfilm in bringing these films to life. Together, Walt Disney Imagineering and Lucasfilm have crafted a place that is going to amaze our guests – a place they’ve never seen before.” – Chris Beatty, Executive Creative Director, Walt Disney Imagineering

Why Millennium Falcon: Smugglers Run Is a Groundbreaking Attraction

“The level of guest participation in Millennium Falcon: Smugglers Run is different from anything we’ve done before. You’re not merely a passenger along for a ride, but rather the protagonist of the adventure. The story unfolds around you and responds to the way you engage it.” – Asa Kalama, Executive Creative Director, Walt Disney Imagineering

“The A1000 Audio-Animatronics figures inside Star Wars: Galaxy’s Edge were asked to do more lifelike movements than we’ve ever done before – sensing your presence, stepping and turning around. How do we make a figure look like he’s actually walking? We were so used to the feet being permanently bolted to the ground. These new figures provide incredible performance and repeatability – you’re getting a figure that looks the same on day one as it does in year five or year 20.” – Brian Orr, Principal Show Mechanical Engineer, Walt Disney Imagineering

“Star Wars merchandise is a cornerstone in the childhoods of many generations of fans. We knew it was important to offer these fans something different in this land than they have ever seen before. Through the lens of Star Wars: Galaxy’s Edge, we have created a retail experience that blends authentic product and spaces with rich storytelling. Whether you’re looking for a small tangible memento of your visit or the ultimate Star Wars collectible, you definitely will find something special in Star Wars: Galaxy’s Edge. Every piece of product has been newly created for this land, and the authentic retail experiences found here are sure to delight fans from every generation.” – Brad Schoeneberg, Director, Merchandise Strategy and New Park Experience Development

How Retail Becomes an Experience Inside Savi’s Workshop – Handbuilt Lightsabers

“Savi’s Workshop is part interactive experience, part show and part retail. It’s what I think we do best when all of our lines of business – merchandise, story, special effects, entertainment and so many more – come to the table and we craft an experience together. We’re excited because you actually build the lightsaber you’ve always wanted, crafting it uniquely for you, one of a kind.” – Chris Beatty, Executive Creative Director, Walt Disney Imagineering

How Disney Cast Members Play a Role in the Guest Experience

“Our Cast are going to bring Star Wars: Galaxy’s Edge to life in new ways. When they step into the land each day, ready to be among our guests, they are going to feel like they are actually from the planet Batuu. They live there; they work on Batuu. And as inhabitants of Batuu, they get to really showcase their personalities, whether it’s being sympathetic to the First Order or yearning to find their way to the Resistance.” ­– Cory Rouse, Creative Director, Walt Disney Imagineering

Why the Play Disney Parks App Will Transform the Guest Experience

“We have amazing technology that will enable Star Wars: Galaxy’s Edge to become a living land. One way we’re doing this is with the Play Disney Parks app. It’s available for download now, and coming soon it will be your very own Star Wars: Datapad. As guests visit us at Star Wars: Galaxy’s Edge, their mobile devices will be transformed into this amazing in-story tool. Using its four functions, you can interact with and unlock another level of storytelling right here at Black Spire Outpost.” – Asa Kalama, Executive Creative Director, Walt Disney Imagineering

“We intend to make this land part of Star Wars storytelling now and well into the future. By design, Black Spire Outpost is a place for adventures to begin – a stepping-off point.” – Scott Trowbridge, Star Wars Portfolio Creative Executive, Walt Disney Imagineering

“When you have a film, it’s a closed experience. You get to the end and it’s over. At Star Wars: Galaxy’s Edge, it’s about being expansive over time; it has a richness of discovery and the idea of possibility. That platform is filled with narrative and play, so guests will want to come back over and over – and have a variety of experiences.” – Carrie Beck, Vice President, Development, Lucasfilm

How Guests May React When They Enter Star Wars: Galaxy’s Edge

“I think grown men are going to cry. I think people are going to fall to their knees and start kissing the ground. All these things sound like an exaggeration, but I feel like it’s going to happen. There’s just so much anticipation and excitement for this. When we first started working on Star Wars: Galaxy’s Edge, I remember thinking: I want to walk into this land and be on the same level as everyone else – from the really hardcore Star Wars fan, to someone who knows nothing about Star Wars. I want to have that urgency to explore and to discover, and to run around every corner and to meet every single droid and alien in this land. I can’t wait to see that!” – Margaret Kerrison, Managing Story Editor, Walt Disney Imagineering

PHOTOS: A Look at the Creatures, Droids, and Aliens of Star Wars: Galaxy’s Edge

PHOTOS: A Guide to Iconic Ships and Other Vehicles Scattered Throughout Star Wars: Galaxy’s Edge