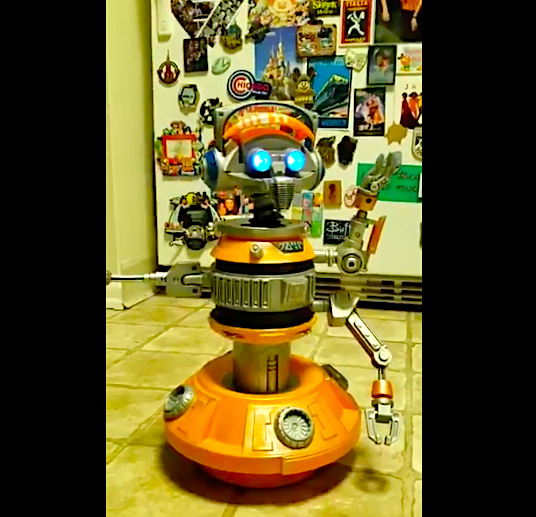 “Welcome aboard! This is the DJ speaking. Make sure you have your drinks secured and your seats in the upright and rock position, because we are about to hit some… turbulence!”

Ever since the lineup for Droid Depot was announced, we knew we had to get our hands on this DJ-R3X figure. Cast Members and social media outlets were recently taken in for Star Wars: Galaxy’s Edge previews and sneak peeks of merchandise and more are making their way onto Twitter and Instagram for all to see:

THIS IS THE GREATEST PIECE OF MERCHANDISE WE HAVE EVER PURCHASED pic.twitter.com/SuRDaKd7UA

Turns out that the DJ-R3X droid is voiced by none other than Paul Reubens. That’s right, Pee-Wee Herman will be voicing the DJ droid at Oga’s Cantina. He previously voiced RX-24 on Star Tours, but Rex has since retired from his days as StarSpeeder pilot and moved on to becoming a DJ, hence the new spiel. A video by Twitter user @cegoodman2 shows off some of his lines.

While no pricing is out for DJ-R3X, we now know the pricing behind the Droid Depot experience, where you can customize––and build––your very own astromech companion for $99.99, plus tax.

If it’s something more high-end you’re after, look no further than a life-sized droid:

Apparently, a full-sized, working R2-D2 will be available for purchase at the Droid Depot for a mere $25,000.

Product limits are in place within the land, so keep in mind that you may only be able to come away with one droid, one DJ-R3X, and one full-sized R2-D2 (not like they have a bunch of those sitting in the back… although that’d be cool, too.)

As for me, I’ll be looking forward to snagging an Oga’s Cantina coaster… and a couple of Instagram stories of DJ-R3X in action.