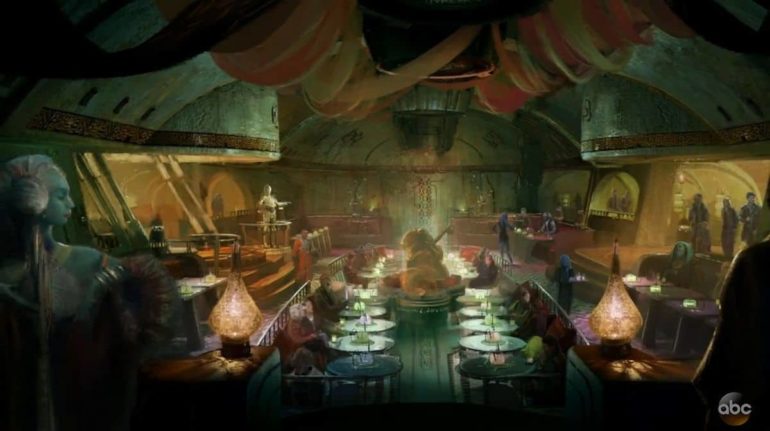 How many of you remember watching the Disneyland 60th Anniversary TV special on ABC back in 2016? Do you remember when Harrison Ford introduced a short preview segment about the newly announced “Star Wars Land” for Disney Parks? If you do, you probably remember seeing concept art for what looked like a dinner show restaurant.

Well, it was a very real idea, and one that came close to fruition. Disney didn’t forget about this concept either, but rather only canceled plans to add it to Black Spire Outpost given capacity concerns. Provided the insane lines we’ve seen at Oga’s Cantina during these reservation periods with a controlled crowd size, it’s hard to argue that Disney didn’t make the right decision not adding a table service experience to the mix. The land didn’t need it. However, a luxury resort experience could probably use such a fine dining experience…

Plans currently have the dinner show restaurant in the very middle of Walt Disney World’s upcoming Star Wars Resort Hotel, tentatively titled “Galactic Journeys: A Star Wars Adventure”. The two-night, three-day experience will include many things to do aboard the faux-space liner (think cruise ship in outer space) that will connect guests via “transport” to Star Wars: Galaxy’s Edge at Disney’s Hollywood Studios. The Chandrila Star Line experience will include the dinner show as part of the “all-inclusive” resort price, which is expected to be quite hefty per person, but given demand and the number of guests with money to burn visiting Disney World, shouldn’t really have a whole lot of vacancy when it opens in 2021.

Start banking those credits now, because you’re going to need to steal a lot of coaxium to afford to stay at the Star Wars Hotel and dine at the very-exclusive dinner show restaurant in two years time.