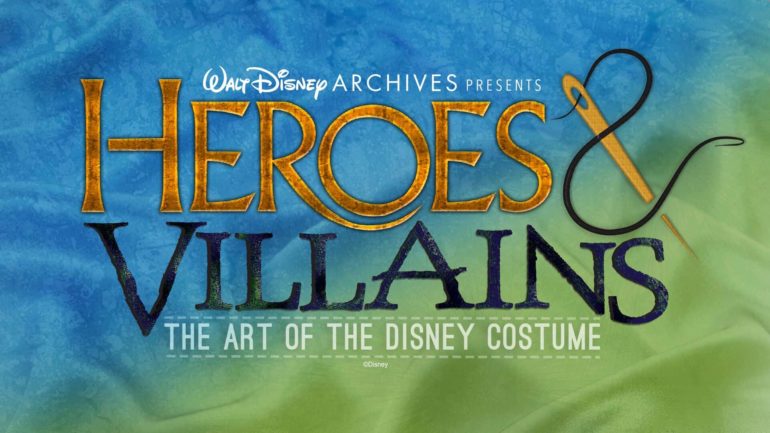 Disney Archives to Debut All-New ‘Heroes and Villains: The Art of the Disney Costume’ Exhibit at 2019 D23 Expo

The 2019 D23 Expo is just a few short months away, and today we’re getting a look at the new costumes exhibit that will be making its debut.

Presented by The Walt Disney Archives, this new exhibit will feature over 70 Disney costumes spanning more than 55 years of Disney movies and television shows. The exhibit, called “Walt Disney Archives Presents Heroes and Villains: The Art of the Disney Costume,” will be on display from August 23-25 at the Anaheim Convention Center during the D23 Expo.

After entering the 12,000-square-foot show space guests will encounter “Cinderella’s Workshop,” a gallery filled with fairy-tale characters’ dresses from various shows and movies, including 1997’s Rodgers and Hammerstein’s Cinderella,  Scarlett Johansson’s gown from Annie Leibovitz’s 2007 Disney Dream Portrait series, 2014’s Into the Woods, the 2015 live-action remake of Disney’s animated Cinderella, and the ABC show Once Upon a Time.

Once guests make their way into the main gallery, they’ll be able to explore three main sections: “Disney Heroes,” “Disney Villains,” and “Spaces Between,” a section dedicated to Disney’s antiheroes.

The “Disney Heroes” section will display many costumes from Disney’s more recent live-action movies, like Belle’s village dress and ballgown from 2017’s Beauty and the Beast, as well as costumes worn by Genie, Aladdin, and Jasmine in the recently released live-action Aladdin. Of course, Mary Poppins will also hold a presence in the gallery, featuring the “traveling dresses” worn in the classic 1964 film, Mary Poppins Returns (2018), and the Broadway musical.

The “Disney Villains” section will feature the trio’s dresses from 1993’s Hocus Pocus, the stepsisters’ dresses from 2015’s Cinderella, and Bette Davis’ dress worn in 1978’s Return from Witch Mountain. In the “Spaces Between” section guests will discover Maleficent’s gown from the 2014 movie, as well as both Evil Queen and Hook’s costumes from Once Upon a Time.

The costumes on display throughout the exhibit represent notable designers, from both past and present, like Academy Award-winners Colleen Atwood, Sandy Powell, and Tony Walton, as well as Emmy winner Ellen Mirojnick and Emmy nominees Eduardo Castro and Penny Rose.

Many of the costumes featured in the exhibit can also be found in The Art of Disney Costuming: Heroes, Villains, and Spaces Between, a new book due out this September from Disney Editions. Attendees of the D23 Expo will be among the first to get their hands on the book, as it will be available in advance at the expo.

Tickets for the 2019 D23 Expo are on sale now. During the expo, we will learn more about the future of Disney Parks, as well as get a first look at the new pavilion icons for Epcot. Additionally, eleven new Disney Legends are set to be honored during the expo. For more information on the event, head over to D23Expo.com.