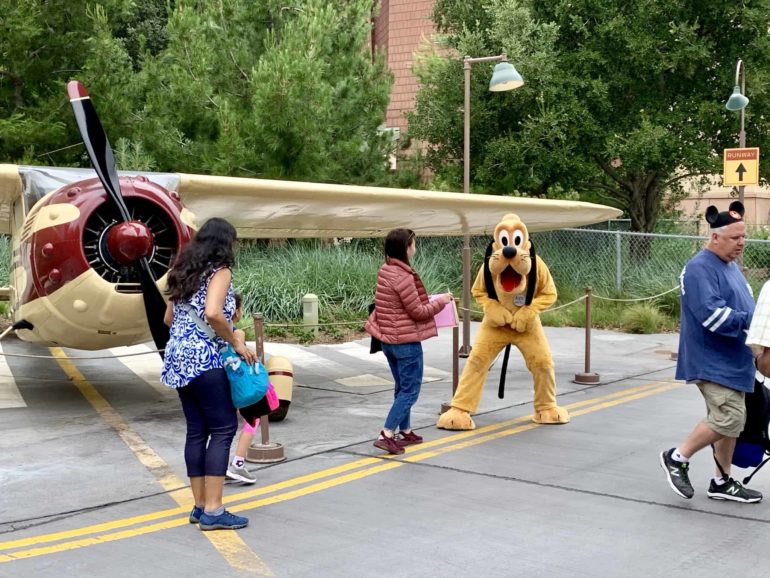 Summer is upon us at the Disneyland Resort, but June gloom is still going strong. If the weather has you feeling down, then maybe some character meet and greets will cheer you up? Our latest visit to Disney California Adventure was filled with character sightings, new merchandise, and more. Keep scrolling to check it out.

In case you missed it, Imagination Pink and Magic Mirror Metallic are the newest color trends to launch at Disney Parks. If you’re a fan of Minnie Ear Headbands, you can find these new colored headbands available at Oswald’s right when you enter Disney California Adventure.

Over in Los Feliz Five & Dime, we spotted a new Queen of Hearts hat available for $27.99. It might be the cringiest piece of merch we’ve seen yet. But at least Disney is trying to get on board with Millennial catchphrases?

Across the way at Trolley Treats, the new Imagination Pink Cake Pops can be purchased for $4.99. They’re bubblegum flavor, which is one of the weirder cake pops we’ve tried yet.

Our first character sighting of the day––Mickey Mouse! We spotted him greeting guests by the water fountain on Buena Vista Street in his dapper 1920s outfit.

In Hollywood Land, a major refurbishment is going on at the eating area between Award Wieners and Mickey’s PhilharMagic.

The entire building facade is covered in scrim and walls block guests access to the eating area.

The walls stretch all the way to the queue for PhilharMagic.

Guests looking to eat their food from Award Wieners will find seating at PhilharMagic for the time being.

Further into Hollywood Land, we spotted more character meets and greets going on.

Black Widow and Okoye, two of our favorite Marvel characters, were out with guests this morning.

And speaking of Marvel, lots of work is being done to transform the former A Bug’s Land into Marvel Superhero Land. Even if we can’t see much, we can hear loud construction taking place on the other side of the Star Industries walls by Guardians of the Galaxy – Mission: Breakout!

On our way out of Hollywood Land, we spotted quite a line of excited guests waiting to meet Fancy Nancy.

We might not be able to see much of what’s going on from Hollywood Land, but we can get quite the glimpse of Marvel Superhero Land construction over by Wine Country Trattoria. Currently, the foundation is being built for the Spider-Man attraction that will be taking over the former “it’s tough to be a bug” theater.

Mater and Red were out meeting guests in Cars Land today, adding to the list of character sightings throughout Disney California Adventure.

The Park has been fairly empty the past couple of weeks. Cars Land, in particular, has been a nice area to stroll through without too many people, especially by Radiator Springs Racers.

Over on Pixar Pier, we found this adorable Little Green Men photo op in Knick’s Knacks.

And outside, in front of Lamplight Lounge, this new Forky character prop is another great photo op for guests excited about his introduction in the upcoming Toy Story 4.

Inside Out Emotional Whirlwind appears to be very close to opening on Pixar Pier (finally). And Cast Members have been touching up walls on the Pier to match the upcoming attraction.

And it looks like the barriers around the foliage are also being painted purple to match the theming of the spinner attraction.

Get Your Ears On Celebration is over and it’s been 7 months since Mickey’s 90th birthday, but the Mickey Mouse Sipper and Birthday Hat Straw is still being sold. If you missed out on purchasing one, you can find it available at Chiller at Paradise Gardens Park across from Silly Symphony Swings.

The Lion King animated film celebrated its 25th anniversary a few days ago and the Park is celebrating with a collection of merchandise.

Special art and limited edition pins can be purchased just outside of The Little Mermaid Ariel’s Undersea Adventure.

And speaking of The Lion King, the new “Tale of the Lion King” outdoor show seems to be drawing a large crowd for its daily performances.

Lastly, on our way out of the Park, we spotted two important furry friends in Grizzly Peak. The first being one of the famous Cats of Disneyland, Francisco. The second being our favorite pal, Pluto.

Those are all the updates we have from our morning at Disney California Adventure Park. Be sure to follow us on Twitter and Instagram for more updates from the Disneyland Resort.