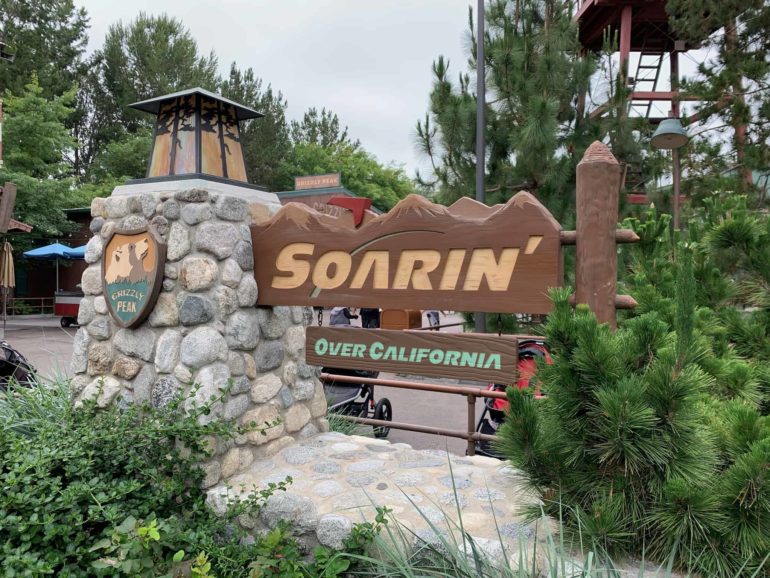 There are still a few more weeks until summer is officially here, but things are already heating up at the Disneyland Resort. One week ago, Star Wars: Galaxy’s Edge finally opened at Disneyland Park. And we were surprised to see low crowds when we were expecting things to be much busier. We found the same over at Disney California Adventure Park, even a week later. Here’s all that’s happening today.

Have you ever seen Buena Vista Street look like this? We were shocked to walk through the turnstiles and be greeted by a calm, empty street.

A new guidemap for the Tale of the Lion King show that debuts today is now out.

Over at Julius Katz & Sons, we spotted some Food & Wine Festival pins still on sale––even though the Festival ended back in late April. If you missed your chance to get one, now you have another opportunity.

We also spotted this new Peter Pan pin available for $9.99. It features an iconic moment from the film when Peter tries to stick his shadow back on using soap.

There are also three new Minnie Mouse pins, because we can never have enough merchandise centered around our favorite mouse (sorry, Mickey). Each of these can be purchased for $9.99.

Over at Trolley Treats, guests will find a small display of Star Wars merchandise and treats. It’s kind of odd to spot shirts on sale where snacks are sold, but Disney wants to make sure guests everywhere aren’t missing out.

Over at Elias & Co, we spotted this adorable Pirates of the Caribbean Redd Dress available for $128.00. It’s the latest dress to hit the shelves at the Disneyland Resort.

And the new Harveys Americana Headband is finally on sale for $78.00. This is the first pair in the new Disney Parks Designer Collection of Minnie Ears to be released.

There is also a new Harveys Americana Tote Bag available for purchase if you want a bag to match your Minnie Ears. It’s two-sided, with Minnie and Mickey on either side. This tote is on sale for $198.00

Even though it’s quite warm this week, we were surprised to see that Grizzly River Run only had a ten-minute wait. A true testament to the low crowds throughout the Park.

Soarin’ Over California is back for a limited time, much to the delight of fans.

Paradise Gardens Park was fairly empty, making for a peaceful walk to Pixar Pier. As we passed by The Little Mermaid Ariel’s Undersea Adventure, we noticed there wasn’t a line for the attraction at all.

Inside Out Emotional Whirlwind is expected to open sometime this summer. And guests walking by will notice the final stages of work being done on the ride. Don’t forget to check out our latest update on the progress being made. And while guests anxiously wait for the ride to open, they can meet Mike Wazowski from Monsters Inc. just in front of the purple walls.

Over at Bing Bong’s Sweet Stuff, we spotted several Rainbow Unicorn Loungefly Backpacks in stock. These arrived last week and have been a colorful addition ever since.

Further down Pixar Pier, Toy Story Midway Mania has a relatively short wait time compared to the standard 45-minute wait or more that it usually has.

And nearby, the Incredibles water fountain along the backside of Jessie’s Critter Carousel has finally been unveiled after being under refurbishment. It looks just as beautiful as ever.

And it’s also the perfect spot to meet Elastagirl.

Speaking of The Incredibles, check out this new Official Handbook for Young Supers we spotted at Knick’s Snacks. This cute book can be purchased for only $8.99, a steal!

That’s all we have for today! Be sure to follow us on Twitter and Instagram for more news from Disney California Adventure and the rest of the Disneyland Resort.