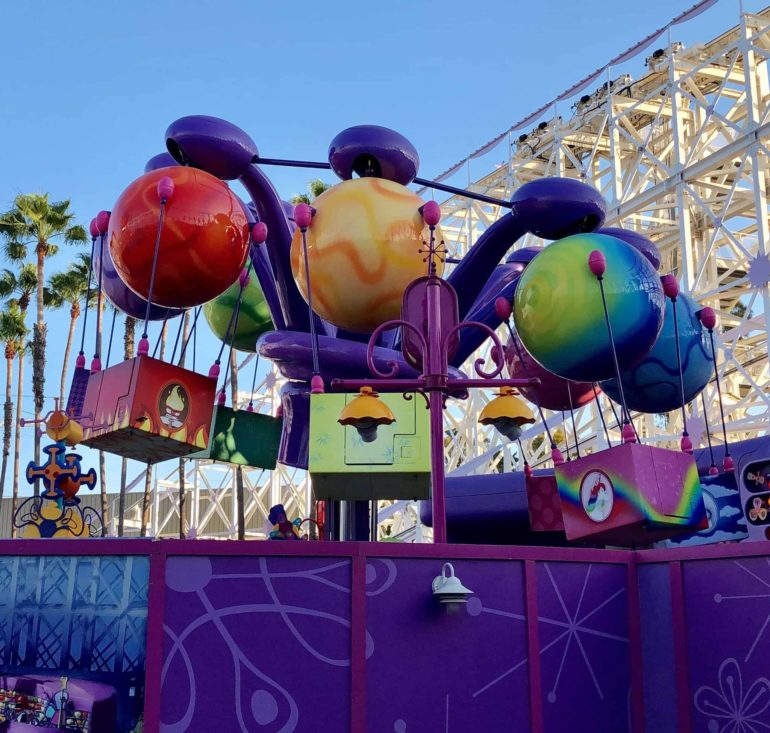 PHOTOS: Character Designs Debut on All Ride Vehicle Baskets at Inside Out Emotional Whirlwind in Disney California Adventure

With Inside Out Emotional Whirlwind officially opening this month, it’s time to start picking out a favorite ride vehicle basket from the attraction. They’re all themed to various characters and emotions from Inside Out, with matching swirly orbs up top.

We’ve covered all the latest additions to the attraction, including character props, signage, decals (because this is, after all, Pixar Pier), lighting, and the Memory Orb wall, if you need to refresh your memory on the last few updates. And now, on to the characters!

We covered Anger in our last update, but here we get a closer look at the flames that engulf his basket. It’s appropriate. Fear peeks out from a houndstooth purple pattern, and Joy appears to be really happy about her lime green basket.

Another look at Rainbow Unicorn’s basket, which includes a rainbow streak across a pink background.

One of the ones we hadn’t seen yet was the Sadness ride vehicle, which is adorable covered in baby blue clouds and a perfectly pouty Sadness.

Bing Bong also gets in on the basket action with his very own polka-dotted basket!

See that teal orb and basket? Those are some of Riley’s Mind Workers, populating every aspect of her mind. The    design on this basket is pretty neat with designs made to look like stylized synapses.

“This is Disgust. She basically keeps Riley from being poisoned—physically and socially.” Disgust loathes her basket already, but that’s normal. We would too if we were in Pixar Pier.

Another view of the baskets as they twirled about during testing.

Speaking of testing, check out this video of Emotional Whirlwind testing, where you can see the full duration of the cycle time for the attraction. The spinning attraction ride doesn’t last long, but is sure to be a hit amongst kids and fans of Inside Out alike.

Inside Out Emotional Whirlwind is set to open later this month.