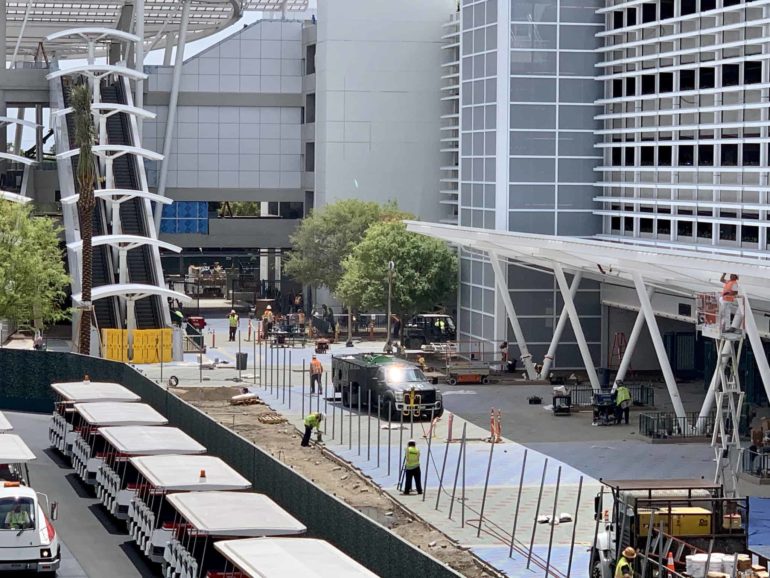 We’re through the first week of June, bringing us that much closer to June 23––the date Pixar Pals Parking Structure is expected to open at the Disneyland Resort. With the projected opening date approaching fast, we thought we’d check in the progress to the structure and pedestrian bridge at Pixar Pals.

The construction crew is hard at work on the tram loading area. This is perhaps the most people we’ve seen working in this area at one time since construction started. They’re likely feeling the pressure.

New beams have been planted in the bricks.

And screens have been installed in the wall above the walkway from the structure to the tram loading area.

The screens were being tested, but they didn’t do much other than flash random colors.

Construction is still coming along at the pedestrian bridge that will take guests from Pixar Pals to Downtown Disney.

It doesn’t appear that too much has changed on this side of Magic Way.

Across the street, however, we can see a lot of progress to the bridge. The wooden foundation is starting to form and we expect it to be covered in concrete soon.

Lastly, the walkway on Magic Way closest to the Pixar Pals is still closed off as work continues on this side of the structure.

Those are all the updates we have today on the progress at Pixar Pals Parking Structure and pedestrian bridge. Do you think this new structure will be done in time for the slated opening on June 23?