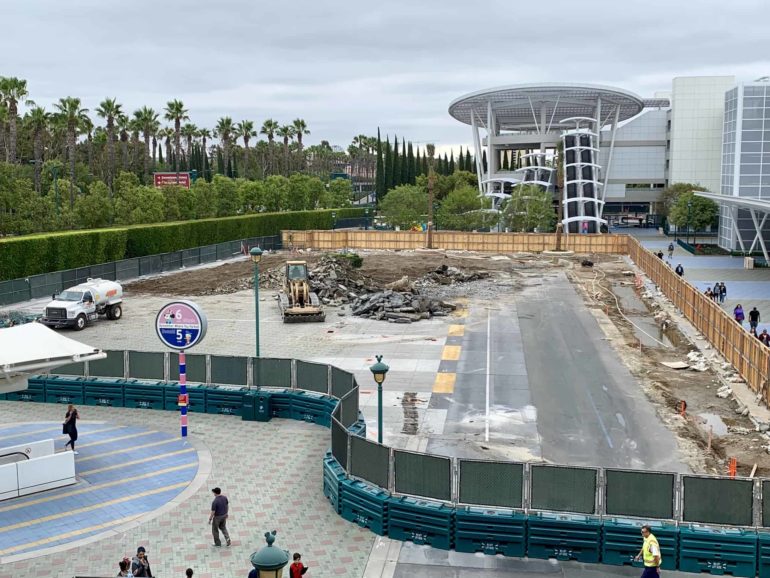 The work at Pixar Pals parking structure has come so far in recent months, yet there is still a long way to go until it’s completely finished. The structure is slated to open before the end of June, yet it’s still not open. And the pedestrian bridge isn’t expected to be accessible until September of this year. The good news is that earlier this week, the new security screening and tram stop opened to guests. But demolition has just started on the tram drop off between Pixar Pals and Mickey & Friends Parking Structure.

The trams are no longer dropping guests off along the hedges to the left. Guests are now being dropped off inside, at the new tram stop, now that demolition has begun at the quad.

Light posts have been removed and the brickwork has been jackhammered.

A large pile of bricks, dirt, and just overall rubble now takes up a huge portion of the quad area. This area was still accessible to guests last week.

A few weeks back, we saw the beginning stages of this demolition. But the state of things has progressed now that the new tram stop has opened.

Meanwhile, the former entrance to the tram stop at the ground level of Mickey & Friends is undergoing demolition, as well.

Most of the brickwork has been overturned and hammered into rubble, revealing the dirt underneath.

And to keep guests safe from all of the ongoing work at the former tram drop off, fences have been put into place. They make for a rather unpleasant sight against the new Pixar Pals structure.

We will have to wait quite a bit longer for the construction at Mickey & Friends and Pixar Pals parking structures to finish. Judging by the ease of the new tram loading area, this tram drop off should be worth the wait.