This den of antiquities is known to hold some of the best artifacts and unique items from all across the galaxy. Dok-Ondar is known for hosting a large collection of items, from the mundane items like ancient jewelry and ancient tools to rare kyber crystals and lightsabers wielded by some famous Jedi and Sith alike.

Dok-Ondar’s Den of Antiquities is located right beside Savi’s Workshop, where you can build your own lightsabers. However, if you’re looking for ones that are more famous, rather than a unique one built by you, you’ll want to pop on by to the next shop to find some of those.

Exterior of Dok-Ondar’s Den of Antiquities

The entrance can be found by the Ithorian gravestone and statue outside. If you’re fluent in Aurebesh though, you’ll be able to tell by “Antiquities” written over the doorway.

Inside Dok-Ondar’s Den of Antiquities

Dok has his den filled with many treasures from across the galaxy and we’ve got a pretty good look at it!

Here’s a section dedicated to the Jedi’s, like Master Yoda and Luke Skywalker. There’s also a wall of Kyber Crystals and Holocrons for you to pick from.

We can see Dok hard at work keeping inventory of his shop and keeping some of his more valuable artifacts away from many travelers.

Like this Imperial Guard helmet and the symbol of the Mandalorians against some chain mail.

Droid parts, various helmets and instruments can be kept away in this alcove.

This section is perfect for any Galactic Empire fans. We can see artwork for Darth Vader, uniforms and badges, a collection of bust figures and more.

It seems like Dok collects many different types of helmets and statues, though they’re out of reach for us so we can only admire them from a far.

Along with helmets, he’s also got quite the collection of creature heads. These poor Tauntauns and Nexu are now up on display for travelers.

Dok-Ondar may appear friendly when you approach him to bargain, but keep in mind, he’s still out for the best deal for him.

Clearly, Dok-Ondar has been busy collecting items from all over the galaxy, and there are tons of interesting things to buy. Has anything caught your eye here, or are you going to be spending your money building a lightsaber and outfitting yourself in the coolest space threads? 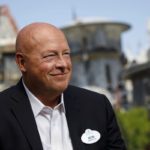