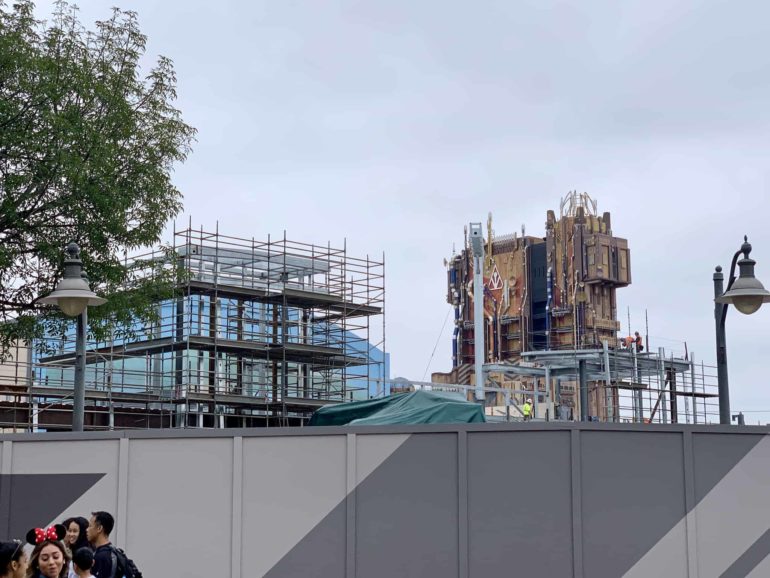 Earlier this week, we reported that permits were filed with the City of Anaheim for a large Spider-Man merchandise store that will be part of the upcoming MARVEL Superhero Land at Disney California Adventure. After the excitement of this news, we decided to stop by the upcoming land in Disney California Adventure to check on the progress being made to the Spider-Man attraction.

There has been a lot of progress since our last update on the construction of MARVEL Land. A couple of weeks ago, we were seeing the very bare bones of the foundation go up. Now, even more of the exterior of the attraction has been erected.

Here’s what it’s shaping up to look like, per concept art:

We broke down how this area will look like upon completion in our full attraction, restaurant, and store lineup post:

As guests enter through the former Bountiful Valley Farm area, they’ll pass under a marquee and walk down a long passage between Mater’s Junkyard Jamboree in Cars Land and the former “it’s tough to be a bug” Theater.

The former “it’s tough to be a bug” Theater building is being repurposed for the new Spider-Man attraction where guests are given a web-shooter of their own to use. The ride appears to be mostly screen-based (likely 3D in nature), so think Toy Story Midway Mania, but with guests shooting webs instead of darts, balls, and rings. The entrance to the building will be rerouted to the opposite side of so it can be accessed from the hub of this new land. The central hub is a large Avengers symbol in the ground that is surrounded by all of the land’s offerings. Think of this as The Avengers’ California Campus––or as Disney has set it up within the land’s storyline––Tony Stark’s new organization, the Worldwide Engineering Brigade, or WEB for short.

As you can see, construction on the Spider-Man attraction has come a long way in just a couple of weeks. With the land being expected to open sometime in 2020, we’re sure we will be seeing even more progress in the upcoming months.