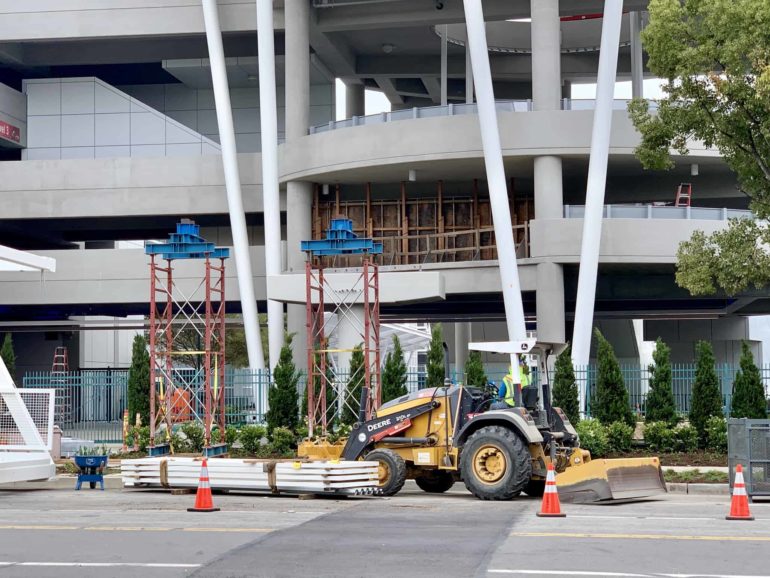 With June 23 just around the corner, things are moving fast at Pixar Pals Parking Structure. We’re bringing you major updates today, including the beginning stages of the installation of the pedestrian bridge and the planting of greenery around the structure.

On Monday of this week, Disneyland Resort sent out an update to Anaheim residents regarding the installation of the pedestrian bridge. Installation is expected to last until June 19, with full closure of Magic Way on June 17 and 18 from 1 AM to 9 AM. The pedestrian walkway will also be closed during those times.

The pedestrian bridge was delivered overnight and now sits along Magic Way, waiting to be properly installed.

The bridge will take guests from Level 2 of Pixar Pals Parking Structure across Magic Way and to Downtown Disney District. Structural supports for the bridge are in the process of going up.

And that’s not all that’s going on at Pixar Pals. We spotted construction crew planting greenery all around the structure, including along the walkway on Magic Way.

Last week, we saw poles being installed alongside the brickwork by the tram loading area. And now boards have gone up along those poles.

More greenery is being planted by the tram loading area. And crew members can be seen powerwashing the brick.

We admit we were a little doubtful that Pixar Pals would be ready by the slated opening date of June 23. However, we’re continuously surprised by the progress being made each week. With the installation of the pedestrian bridge, it looks like they should be on track to open just in time for the reservations period to end at Star Wars: Galaxy’s Edge.