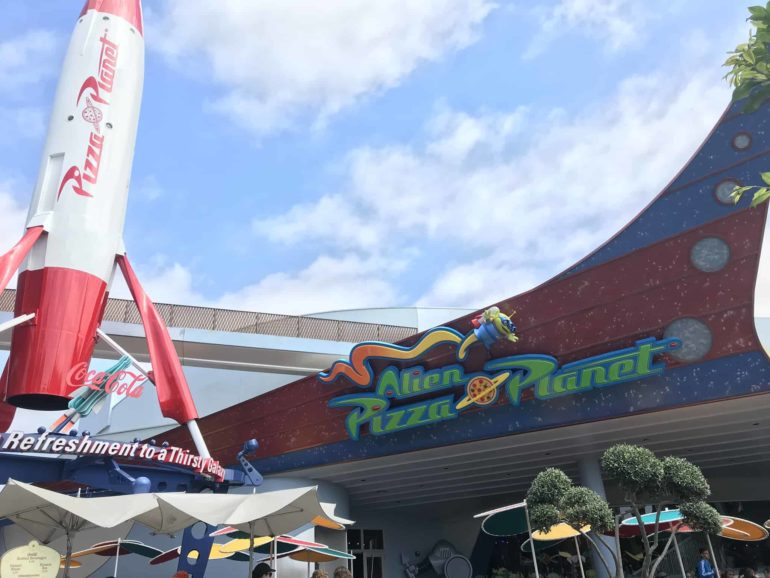 A couple of weeks ago, we posted about the redesign of the Moonliner Rocket. The Moonliner (III) had been a staple in Tomorrowland since 1998, with roots going as far back as the opening of Disneyland in 1955.

And that’s not the only thing to change at the restaurant. The new Alien Pizza Planet sign has been installed, complete with a flying Little Green Men alien.

The sign is quite bright and colorful, offering an interesting contrast against the darker tones of the building’s exterior.

Not going to lie, this little guy does catch our interest and entices us to go inside.

Speaking of inside, the restaurant’s interior also received a refurbishment too. When you walk through the doors, there’s a new display of drinks, Parfaits, and Alien Macarons to the left.

The center of the grab-and-go area used to be blocked off by a large beverage station, but it’s now been removed entirely. It’s not much easier to navigate between the food offerings in the restaurant.

Guests can now grab their drink cups by the register before they pay for their meal.

And just past the registers, you’ll find the new beverage station to the left.

This new station is much more organized and efficient than the one before. If you’re looking to fill up on water, it’s actually poured from the Gold Peak Iced Tea cannister.

Lastly, there have been changes to the seating portion of the restaurant as well. Above, a new red rocket has been added to the ceiling, possibly in tribute to Redd Rockett’s Pizza Port. And on the ground, gone are the booths that used to occupy the center of the seating. Now, every table is a free-standing table that can be moved around for easier access.

Now that Alien Pizza Planet is a permanent part of Tomorrowland, how are you feeling about the transformation? Do you miss the piece of history that’s lost or do you welcome these changes?