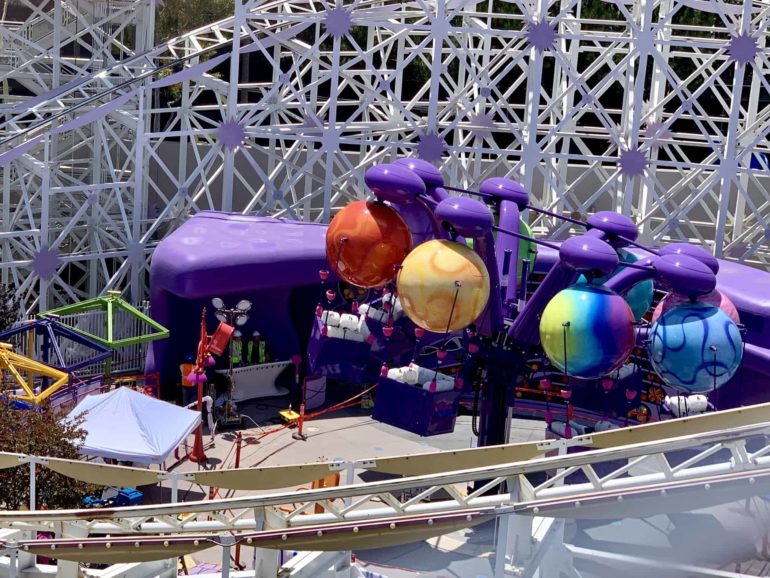 In case you’re living under a rock, you might not have missed that Star Wars: Galaxy’s Edge opened in Disneyland Park a couple of days ago. But the park across the esplanade is getting a new ride too! Well, at least it’s sort of new. Soon, Inside Out Emotional Whirlwind will be opening on Pixar Pier in Disney California Adventure. Here’s an update on the progress being made to the upcoming attraction.

For our last update, we noted that lights, speakers, and decor had been added to the attraction. We noticed these as we walked by the attraction, but here’s a glimpse of what is going on from up above. Not only have lights and speakers been added, but purple railing has been added outside of the attraction area.

The tent foundations are still bare, but they should be covered by the time the attraction opens.

The purple wall with colorful “spinning” cogs is a new addition. It does look a little different from the concept art. If they do plan to follow the concept art, a large statue of Disgust should go right in front of this wall.

If you’re lucky, you might catch a glimpse of the spinner undergoing testing throughout the day. Now that the ride vehicles, where guests will sit, have been attached to the Memory Orbs, Cast Members have been testing the spinner base for safety.

No decals have been added yet to the purple ride vehicles, but there should be some judging by the concept art. You can’t be anything in Pixar Pier unless you have decals!

While no date has been specified yet, Inside Out Emotional Whirlwind is slated to open sometime this summer. Are you excited for this final attraction on Pixar Pier to debut?