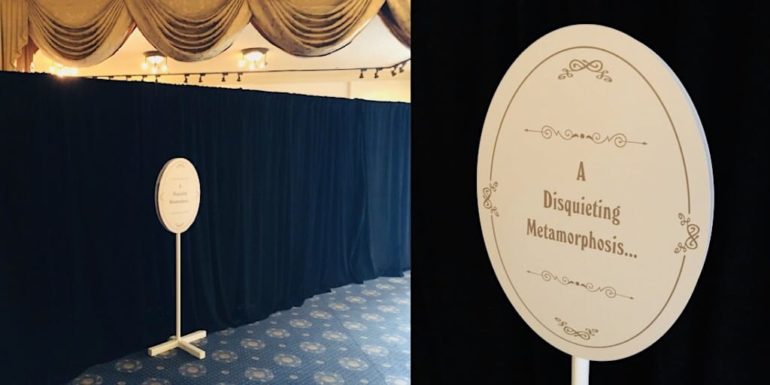 Beware, Foolish Mortals, for a grim, grinning 50th Anniversary is coming up sooner than you think…

That’s right, a disquieting metamorphosis is taking over the Disney Gallery on Main Street in Disneyland Park. It’s changing, morphing into a 50th Anniversary exhibit celebrating none other than the classic Haunted Mansion attraction.

Curtains are currently drawn across the gallery as the metamorphosis takes place.

The Disney Gallery is the place to explore Disney-inspired art by contemporary artists—plus historic and rare theme park concept renderings, models and memorabilia. The space is being transformed as part of the larger Haunted Mansion 50th Anniversary celebration in the park, which also includes the separately-ticketed after-hours event known as “The Haunted Mansion: Celebrating 50 Years of Retirement Unliving.”

Will you be heading over to the Disney Gallery to assemble for a swinging wake? Stay tuned for the big reveal as we near the Mansion’s anniversary in August. There’s always room for one more happy haunt.