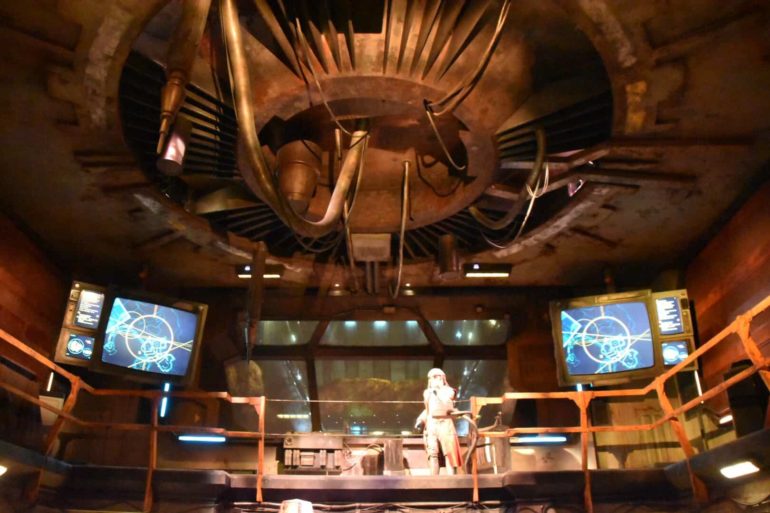 Since the announcement of Star Wars: Galaxy’s Edge during the D23 expo back in 2017, we’ve been following progress in the land rabidly, awaiting for its monumental grand opening. Well, the day has finally come and we are finally on the ground at Black Spire Outpost, and we went straight for the centerpiece: a huge, beautiful hunk of junk best known as the Millennium Falcon.

While we brought you some first impressions of the ride early on during previews and then again during press releases, we wanted to hold off and give you our unabridged, real-world (read: not some empty media preview) experience with the attraction. We’ll start by setting the scene…

Following the events of “Star Wars: The Last Jedi,” Chewbacca brought the Falcon to Black Spire Outpost for repairs at this spaceport on the edge of the galaxy. In exchange for some much-needed replacement parts, Chewie is loaning the Falcon to Hondo Ohnaka, a smuggler who is now making good use of the ship that made the Kessel Run in less than 12 parsecs. It is at this point guests enter the story of Millennium Falcon: Smugglers Run.

You can find the bucket of bolts tucked away in a corner in between where Oga’s Cantina and Docking Bay 7 Food and Cargo is located (in story, we are at Docking Bay 5). This attraction needs no marker. You really can’t miss it.

You can already see separate queues in place for Single Rider, Stand-By, and FASTPASS, equipped with matching scanners. Do keep in mind that FASTPASS is currently not available for the attraction.

Upon entering the queue, there are vantage points where you can look out onto different angles of the Millennium Falcon. You then begin making your way between switchbacks lined with props and vignettes.

Eventually you are led into the pre-show room where Hondo Ohnaka stands ready to brief guests about their journey. Fans of Clone Wars or Star Wars Rebels may appreciate the cameo, but all guests will definitely stare in awe of the fluidity of the animatronic. (And his adorable sidekick, R5-P8.) Millennium Falcon: Smugglers Run marks the first time Hondo has been seen in any form other than an animated on-screen character.

Guests then go down a hallway where they are then grouped. When it’s time for the mission to begin, guests strap themselves into the Falcon cockpit in groups of six.

Each person is assigned one of three critical roles to complete their mission, and guests know it’s their turn to act when buttons light up in the cockpit:

After being given their roles, guests wait inside the Falcon to be called to the cockpit. This is a great time to grab some photos at the holochess table and such.

Eventually, your group color is called, you watch a short pre-show video, and then load into the cockpit.

Guests begin their adventure by powering up the Falcon, and then you are off on your adventure. From there, Hondo Ohnaka (with occasional input from Chewbacca) helps guide guests along their mission.

For visual reference, from here on out, we have an in-depth POV ridethrough of our first ride on the Millennium Falcon: Smugglers Run attraction:

I’ve seen a lot of negative reviews of the ride experience, but I can’t fathom the problems people have with this experience. I’m usually not the biggest fan of screen-based attractions, but I can’t imagine another way to let guests pilot the spaceship of their dreams.

The cockpit is insanely detailed. Every button, every switch seems to be there. You are piloting the Millennium Falcon. Flying the ship with friends is fun (as you heard in the video). Sure, some jobs are more fun than others, but I’ve found that some guests like some more than others.

If you are a single rider, you’re going to be in the backseat and be an engineer unless you make some sort of arrangement with the guests you’ve been paired with. Engineer isn’t terrible, but it’s clearly the role least thought out. You just hit some buttons to “fix” the ship. If you’re crew performs poorly, you’ll be very busy. If the pilots are good, you’re not going to have much to do. On the bright side, Engineers get the best view of the ride as they can see the entire cockpit window, but you do have to look at the wall to see what you need to fix.

Gunner is fun, but smashing a button to fire at things should be. It is a lot of button-mashing, but I enjoy blowing things up.

The two pilot jobs are different. Left pilot steers left to right, while the right pilot points the ship up or down and also puts the Falcon into hyperdrive. Pulling the lever for the first time is one of those Disney Parks moments that will stay with you forever. Oh yeah, and someone needs to yell, “Punch it!” at them, or I’m going to judge you.

It’s fun to note that you may access additional scenes and such based on your crew’s performance. Sometimes we got the asteroid field scene, sometimes we didn’t. The better you do, the more you will see.

Millennium Falcon: Smugglers Run is fun. It’s the world’s coolest arcade game, and I don’t think it’s a bad thing. It’s the secondary attraction in Galaxy’s Edge (once Rise of the Resistance actually opens) and I think people are forgetting that. It didn’t need to be the greatest attraction of all time, because that isn’t what they were trying to do. Imagineers aimed to realistically put you at the helm of the most iconic vessel in the galaxy, and they succeeded.