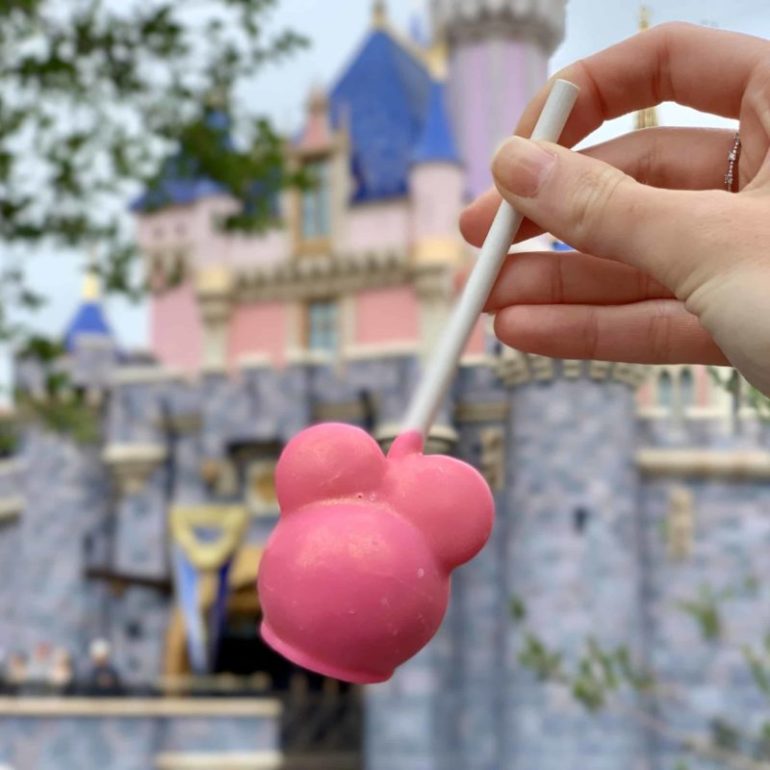 With a new trendy color collection comes a new treat. A few months back when the Briar Rose Gold Collection was released at the Disneyland Resort, we found a matching Cake Pop available at Candy Palace. The same happened when Potion Purple was released. And the tradition continues with the Imagination Pink Collection. We spotted an Imagination Pink Cake Pop at several confectioneries throughout the Disneyland Resort, including Candy Palace, and we had to give it a try.

Before we even had a chance to take a bite, the Cast Member at Candy Palace told us this cake pop is bubblegum flavored. Since most of their cake pops are vanilla flavored, we were a little taken aback by this. Even more so after taking our first bite. We’re not sure about you, but we’ve never really thought of bubblegum and cake as a good combination.

This cake pop wasn’t awful, but it was weird. Thankfully the bubblegum flavored isn’t super pronounced and you get more of the frosting flavor in each bite. But the bubblegum flavor was present enough to turn us off of this treat. We’ll keep our bubblegum and cake separate, thank you very much.

Unfortunately, this Imagination Pink Cake Pop isn’t quite as good as it looks and misses the mark for us. But if you’re into bubblegum-flavored desserts, then this might be your thing. Give it a try and let us know!