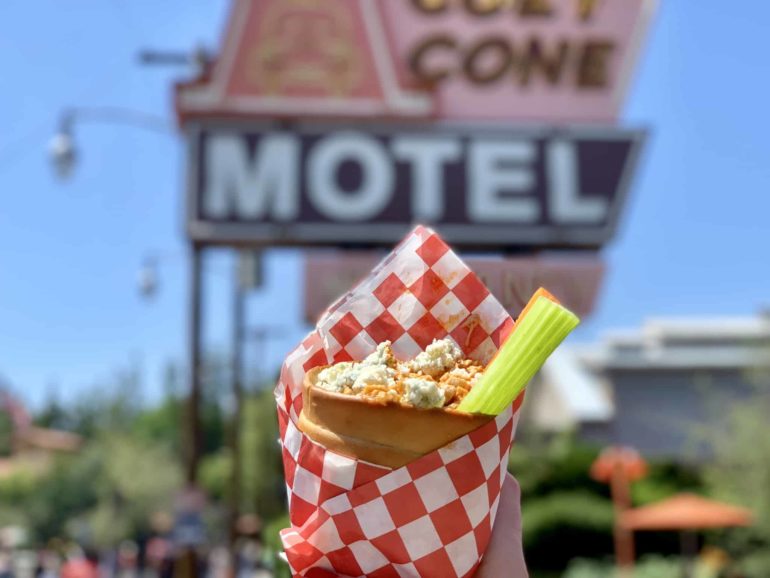 We’re in for another hot summer at the Disneyland Resort. And if you’re looking to turn up the heat just a little bit more, Disney California Adventure is offering a new specialty item just for you. Last summer, Cozy Cone Motel in Cars Land offered a Habanero Meatball Cone to spice things up. And this year, they’re offering Red’s Hot Chicken Cone, inspired by our favorite fire truck, Red.

This specialty Cone consists of spicy Buffalo chicken, creamy Ranch dressing, carrots and celery stick, and topped with crumbled Blue cheese. It can be purchased at the Chili Cone Queso window at the Cozy Cone Motel.

If you are a fan of Buffalo chicken, then this Cone was made for you. I’m not a huge fan of Blue cheese, but it really complemented the kick of the Buffalo sauce and added a creaminess to the chicken. I ended up really liking it! There isn’t any Blue cheese mixed in after you get through what’s added on top, so if you’re not into it you can just pick it off with a fork.

Despite the description listing ranch dressing as one of the ingredients, I didn’t detect any ranch whatsoever. But I didn’t find that it was really needed. The chicken wasn’t dry at all, although the Buffalo sauce could be responsible for that. The sauce did have a kick to it, but it wasn’t unbearably spicy. The sticks of carrot and celery were a nice addition to balance out all of the chicken, which there was a lot of.

I was pleasantly surprised by how delicious the Cone itself was. The bread was soft and worked well to soak up the grease from the Buffalo sauce. Because there was a lot of Buffalo sauce. In fact, that’s my only real complaint about this specialty Cone. As you can see in the photo below, the sauce pooled up amongst the chicken and it created quite a mess. You’re going to need a ton of napkins on hand while you eat this.

Overall, I really enjoyed Red’s Hot Chicken Cone despite not being a huge fan of Buffalo chicken. I wouldn’t hesitate to get this again while it’s being offered at the Cozy Cone Motel. If you’re looking for a quick bite to eat that you can take on the go, this is a good option in Cars Land.