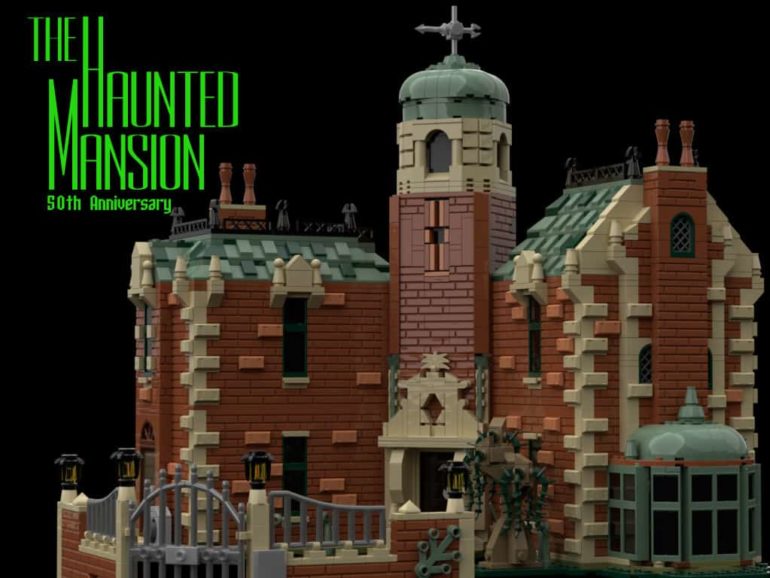 The Haunted Mansion 50th Anniversary Set Materializes on LEGO IDEAS; Vote to Put it Into Production!

Serpents and spiders, tail of a rat, call in the Disney fans, wherever they’re at! A new LEGO IDEAS set based on The Haunted Mansion needs your help to make this nightmare a reality!

The outstanding, approximately 2,900-piece set perfectly captures the foreboding exterior of Gracey Manor. And while the interior isn’t exactly like the ride, it does capture some memorable scenes from the attraction. Let’s take a tour, shall we? Do not pull down on the safety bar, please. (Because there isn’t a Doom Buggy.)

In the center, you can see the endless hallway, complete with a floating candelabra and a sturdy suit of armor. And upstairs in the attic, it looks like Madame Leota’s talking to some friends on the other side!

I spy a piano, easily playable by a musically talented spirit, along with a library of the world’s finest ghost writers.

And is that a world-famous Gracey Manor bust I see? It’s not looking back at me… for now…

As you can see, people are dying to see this set go into this production. And those blocks in the back could be stand-ins for some stretching portraits… or is it just my imagination?

Moving to the other end of the manor, a swingin’ wake is getting ready to take place, and it looks like you’re invited!

Look at that overhead balcony! I wonder what could be up there… perhaps tourists on a tour of the grounds?

Of course, the real stars of The Haunted Mansion are its many spectral residents. And while you may not get 999 happy haunts, there are six famed denizens that are included with the set, along with a lively maid and butler.

Included in the set is the Hatbox Ghost, Phineas, Ezra, Gus (aka the Hitchhiking Ghosts), Constance Hatchaway (aka “The Bride”), and the mansion’s organist.

Now while we may not be looking for any ghosts to join this manor, we certainly are looking for volunteers. If you’d like to see this set see the light of day, head over to the LEGO IDEAS page and vote to make this an actual set! As of the writing of this article, the set has over 2,700 supporters, well on its way to the 10,000 supporter threshold needed to be considered by the LEGO team. This set could be a fabulous addition to the Cinderella Castle set.

And if you’re looking to see more Disney Parks architecture in LEGO form, there’s still time to support a proposed Spaceship Earth set. You can vote for that here!