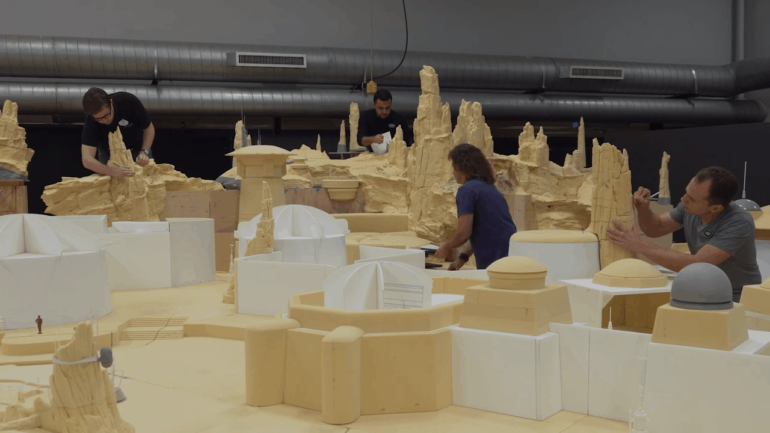 VIDEO: “Building the Spires of Star Wars: Galaxy’s Edge” – Imagineering Takes You from Model to Reality

Hey, did you know that Star Wars: Galaxy’s Edge is now open at Disneyland? Okay, did you know how they designed and constructed this new land? Would you like to know?

A new video from Walt Disney Imagineering shows off the creation of the spires that give Black Spire Outpost its name, from the model-building process to fabricating the rockwork to actual construction.

It took a mix of sophisticated digital technology and intricate hand-finished artistry to create the iconic spires and rock work in Star Wars: Galaxy’s Edge. The Imagineers behind this masterpiece brought together a multitude of diverse skills and disciplines to help transport guests to this fully immersive experience on the outer rim of the galaxy.

The video itself is fascinating for those who are interested in the Imagineering process. First, we see the talented sculptors who brought the model to life. Then, the unpainted model is scanned by a special camera that recreates it as a computerized 3-D model.

Then, the model is painted to be an exact replica of Black Spire Outpost. Deciding the colors that the spires will be painted are part of this process.

Then, wireframe constructions based on the 3-D scans are manufactured, providing the framework for the actual spires.

Once all of the framework is up, the frames are filled in and painted, creating the incredible look of Batuu.

If you’re like me and love learning about everything Walt Disney Imagineering does to bring their attractions and lands to life, this is a worthwhile watch.

Keep reading WDWNT for news about everything coming to the Disney Parks!

“Marc Davis in His Own Words: Imagineering the Disney Theme Parks” to Release September 3rd, 2019