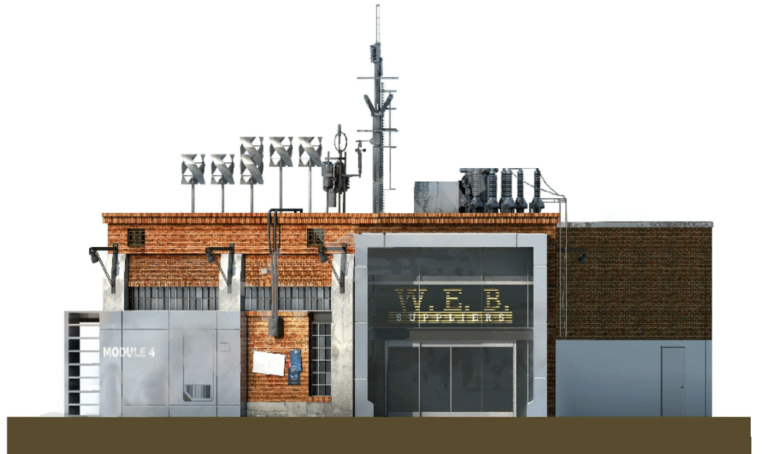 While Disney has said they will reveal a lot more about the Marvel themed-lands coming to Disney California Adventure park at Disneyland Resort at the D23 Expo, we won’t have to wait much longer to at least get a feel for the land’s design and layout. In fact, just yesterday we brought you the grand reveal of the ride vehicle for the much-anticipated Spider-Man attraction. Today, we’ve got another sneak peek for you, and this time, it’s the W.E.B. Supplies store coming to Disney California Adventure:

An industrial-looking, brick-lined building set across from the Spider-Man attraction will be the designated Spider-Man shop on the Marvel-themed Avengers campus.

“As part of this global initiative, Tony Stark has founded the Worldwide Engineering Brigade — or WEB for short— to develop advancements in super-powered technology, including new enhancements to Spider-Man’s suit as their debut project.

Disney is expanding its story universe by creating a new organization, the Worldwide Engineering Brigade, to be the setting for this experience. Though WEB is grounded in classic characters like Peter Parker, it is an organization that all guests can be a part of – one that invites guests to engage with these iconic heroes like never before.”

Let’s take a look at some of the furnishings that the store will have:

These could be self-design kiosks where you make customized merchandise, or also touchpad-based POS systems.

Various displays to show the full collection of Spider-Man wares. As with the shop’s exterior, we expect the industrial theme to carry over into these furnishings, with touches of worn-out wood and oxidized metals.

An interior shot of the shop showcases the brick-lined interior as well as a reference to SpiderBots. Could that be the land’s version of buildable droids, akin to Star Wars: Galaxy’s Edge? I guess we’ll have to wait and see.

As for other shopping opportunities, a larger shop is planned for near the second phase Avengers ride. The W.E.B. Supplies shop is the smaller of the two stores.

Thematic elements can change, but these are the overall plans mapped out for both phases of the upcoming Marvel land at Disney California Adventure starting in 2020. So, who’s ready to buy their first latex Spidey suit? (I… think I’ll settle for a SpiderBot.)