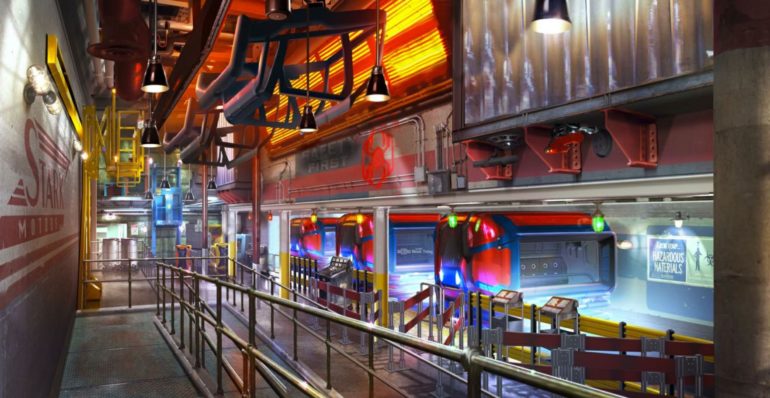 While Disney has said they will reveal a lot more about the Marvel themed-lands coming to Disney California Adventure park at Disneyland Resort and Walt Disney Studios park at Disneyland Paris at the D23 Expo, we won’t have to wait until then to see the grand reveal of the ride vehicle for the much-anticipated Spider-Man attraction.

Disney has described the attraction as follows:

“Both parks will feature an exciting new attraction where guests of all ages can join the heroes in action. Disney is expanding its story universe by creating a new organization, the Worldwide Engineering Brigade, to be the setting for this experience. Though WEB is grounded in classic characters like Peter Parker, it is an organization that all guests can be a part of – one that invites guests to engage with these iconic heroes like never before.”

“Besides WEB, there’s also brand-new, cutting-edge interface as part of this fun, interactive attraction. Through a blend of never-before-seen technology and practical effects, guests will get to experience for themselves what it is like to have the abilities of a Super Hero.”

According to rumors, guests will be able to sling webs like Spidey in this new ride, but the information above does make it sound like maybe there’s more abilities. We’ll have to wait and see if that’s true, but until then, why don’t we take a look at some never-before-released concept art of the ride vehicle and load area for this upcoming attraction?

So, here is your first look at the Spider-Man colored, red and blue pod-like vehicles waiting for guests to board in the ride’s loading area.

It does appear as if there is a glass window in front of guests in each vehicle. It will be interesting to see what role this plays in endowing guests with super powers, if it does at all. The attraction is reportedly in 3-D (requiring glasses), but as you read above, Disney is touting some practical effects as well.

If the vehicle looks somewhat familiar, well, it’s because it has been hiding in the poster advertisement for the California Adventure land released quite some time ago:

If you look closely, you’ll even spot wall art for “Stark Motors” in the industrial load area for the ride. A similar design (but one that says “Stark Motives”) can be seen on the previously released concept art for the California Adventure building exterior.

So, who’s ready to fight alongside Spider-Man in the new lands Disney is creating at both Disney California Adventure park and Walt Disney Studios park?