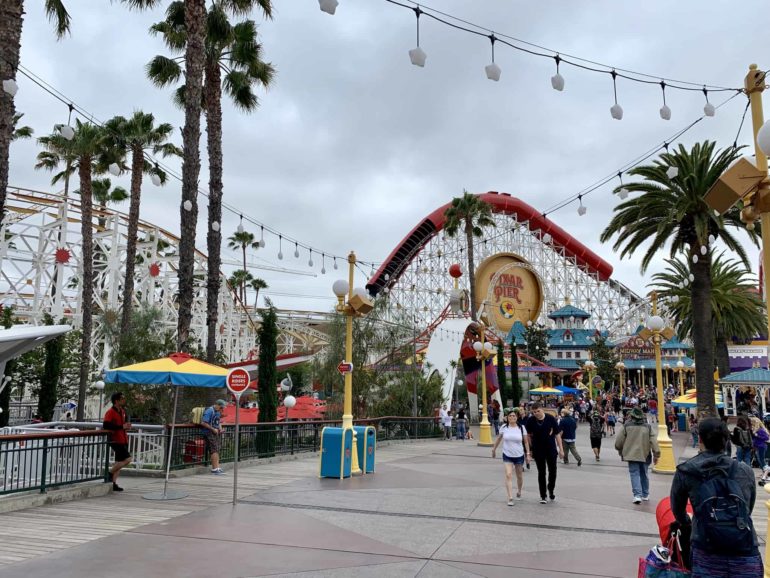 June has come to an end, which means Star Wars: Galaxy’s Edge has been open a month now. We expected crowds to be unbearable at the Disneyland Resort, but thankfully that hasn’t been the case thus far. Mornings have been especially enjoyable. Here are the latest happenings at Disney California Adventure, including new merchandise and a “Toy Story 4” takeover.

The Disney Starbucks travel mug is now being sold in Los Feliz Five & Dime. So if you can’t make your way across the Street to Fiddler, Fifer & Practical Cafe, you can purchase one at this location.

Speaking of Disney Channel, a new Vampirina children’s costume is available for $59.99 at Big Top Toys. This is perfect for the littles who want to channel their inner vampire for Halloween at the new Oogie Boogie Bash.

Our first sighting of new Toy Story merchandise of the day. This t-shirt at Big Top Toys is available for $24.99 and features the iconic duo of Woody and Buzz Lightyear.

It’s summer, so the weather is heating up. These cute new hair ties are perfect for cooling down and looking cute while wearing your hair up. They can be purchased for $9.99.

We still can’t get over the new Bo Peep apparel. Her outfit can be purchased for $168.00 and the sheep purse for $65. The Toy Story dress, featuring a collage of characters from “Toy Story 4” is available for $128.00.

Over in Hollywood Land, the Black Panther meet and greet just got a major upgrade. A member of Wakanda’s Dora Milaje (all-female military warriors) stands guard outside the meet and greet queue.

The black and yellow structure with the Black Panther symbol is new. And while it’s not quite as cool as the Hangar where Captain Marvel greets guests, we still love that Black Panther is getting a more permanent area in Hollywood Land.

Groot continues to make appearances during the day, too, which always seems to bring a smile to the faces of guests.

We decided to check on the construction of Marvel Superhero Land nearby, but it doesn’t look like anything has changed on this end since our last visit.

But we are seeing some progress down at the other end of Marvel Superhero Land. Check out our latest update on the construction of the upcoming Spider-Man attraction.

We got Forky and Hamm!

Last week, a special edition Nala and Simba plush were found at Disney’s Animal Kingdom in Florida. And now they’ve made their way into Disney California Adventure. The purchase of one of these plushies for $19.99 benefits the “Protect the Pride” Conservation Cause Campaign.

As we made our way to Pixar Pier, we spotted a creative display of handmade “Forkys” at Bayside Brews.

That’s one way for Cast Members to show their love of the newest “Toy Story” character.

But the ride isn’t the only thing that’s new. A new stroller parking sign has gone up across from the attraction and the fencing along the nearby planter has been redone to match.

We spotted some touch ups to the fencing along the planters by Bing Bong’s Sweet Stuff. It’s nice to see that the area is being maintained.

Bo Peep is currently greeting guests outside Toy Story Midway Mania. And yes, she initially looks quite creepy. But witnessing her hugging guests and posing for photos helps give her a more approachable look.

Over in Knick’s Knacks, the Toy Story Harveys collection is available for purchase, as well as the new “Toy Story” Dooney & Bourke Handbags. Be sure to ask a Cast Member for assistance if you’d like to purchase any of these items.

On our way out of the store, we spotted this heartwarming (or is it heartbreaking?) art of Carl and Ellie on display. “Toy Story 4” might be taking over Disney California Adventure right now, but it’s nice to see other Pixar films get some recognition.

Those are all the updates we have from our morning trip to Disney California Adventure. Don’t forget to give us a follow on Twitter and Instagram to receive more updates from the Disneyland Resort.