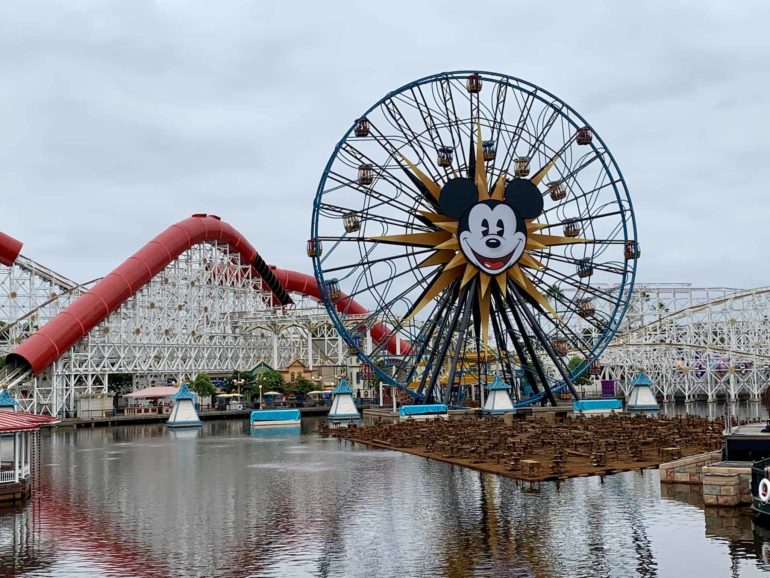 There’s been a lot of talk about the unusually low crowds at the Disneyland Resort so far this summer. With most Annual Passholders blocked from coming to the Parks, there’s definitely been a noticeable shift in attendance. While the Fourth of July holiday did make things busier last week, we’re back to seeing low crowds again. Here’s a look at what’s going on at Disney California Adventure today, including a look at the crowds and character sightings in the Park.

We were actually a little shocked to see such a crowd of people waiting to cross through the Main Gate into the Park. And based on this sight, you’d expect the crowds to be high throughout Disney California Adventure.

However, the Park doesn’t look packed at all after going through the turnstile.

The seating area for Award Wieners is still under refurbishment, and now there is a sign redirecting guests to the temporary seating set up at PhilharMagic.

In case you missed it, Award Wieners will be getting a new, expanded seating area. Permits filed with the City of Anaheim show that a 20 square foot ticket booth will be added for theming.

Nearby, we spot Black Widow taking a line of guests on a secret mission through Hollywood Land.

Despite the gloomy weather this morning, it feels warm and humid outside. Animation Academy is a great place to rest and cool off, and this morning, the show building was practically empty.

Next door at Off the Page, we spotted the newest installment of Disney Parks Designer Collection Mouse Ears Headband. The Alex and Ani Headband is currently on sale for $178.00.

Stark Industries construction walls continue to line the pathway to the rest of Disney California Adventure Park. Not much has really changed with the upcoming Spider-Man attraction, as far as we can see. But we’re sure Cast Members are hard at work on the ground, as this new Land is slated to open in 2020.

Perhaps once more details are announced for the Land, we will see Blue Sky Cellar transformed to showcase concept art? Blue Sky Cellar still houses a display of concept art for Pixar Pier, despite the fact that the Pier opened a year ago.

A morning stroll through Cars Land was pretty quiet and empty. The line for Mater’s Junkyard Jamboree was less than five minutes. But we did see quite a line of guests waiting to meet Lightning McQueen at Cozy Cone Motel.

Over by Ramone’s House of Body Art, we saw a Cast Member touching up the paint on the fences. This has been a frequent sighting throughout the Disneyland Resort in the last couple of months.

The walkway past Radiator Springs Racers to Pacific Wharf was a little busier than usual today, thanks in part to a crew of Cast Members filming the cars race by.

We have to admit, seeing part of the World of Color paneling on the surface gave us flashbacks to earlier this year when the nighttime show was still under refurbishment.

Overall, Pixar Pier is fairly empty this morning. Guests are able to walk right onto Incredicoaster.

Unfortunately, Jessie’s Critter Carousel was temporarily closed this morning. But that didn’t seem to have much of an impact on the wait times for other attractions.

As we made our way down the Pier, we came across a snack vendor cart completely abandoned in the middle of the walkway.

We’re not exactly sure why it was just left here, but it’s a good thing the crowds weren’t heavy. Otherwise, this cart would have been more of an inconvenience.

Even Inside Out Emotional Whirlwind didn’t have too long of a line this morning, despite being the newest attraction to open. We did see a group of guests enjoying the new seating area by the attraction’s exit.

Overall, the crowds were really low this morning at Disney California Adventure. If you’re willing to wake up early, Park opening is really the best time to visit, to experience as many attractions as possible in a short amount of time.