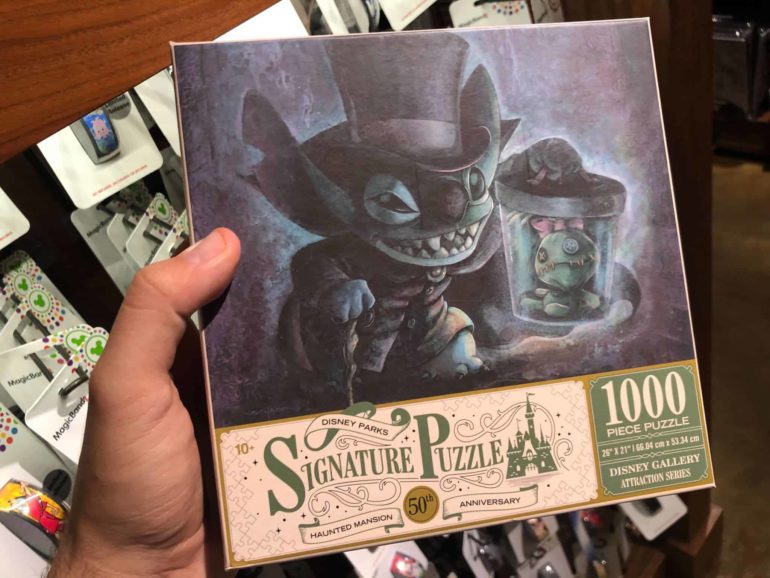 We’re gearing up for the 50th Anniversary of the Haunted Mansion on August 9th at Disneyland, but in the meantime, we’re excited to see all the special merchandise coming out for this beloved attraction. What better way to celebrate our favorite Grim Grinning Ghost than with another one of our favorite characters? That’s right, this brand new signature puzzle features Stitch and Scrump as the Hat Box Ghost from Disneyland’s Haunted Mansion.

The puzzle is sadly not 999 pieces like the happy haunts that currently reside in the Haunted Mansion, but as our ghost host reminds us, there’s room for a thousand, which is how many pieces make up this puzzle.

This Disney Parks Signature Puzzle was released specifically to honor the 50th anniversary and is part of the Disney Gallery Attraction Series. We found it in Animal Kingdom at the Riverside Depot, but we’re sure we’ll be spotting it around both Walt Disney World and Disneyland very soon. Though you can make sure this mischievous ghost follows you home for the price of $21.99.

The back of the box gives a bit more insight on the artist as well.

Darren Wilson creates works of art for the Disney galleries at the Walt Disney World Resort, Disneyland Resort and the Disney Cruise Line. Darren is a celebrated Disney Artist and has developed his own unique style of capturing the essence of his subject matter through his artistic vision.

We couldn’t have agreed more with this when we look at Experiment 626 and Scrump re-imagined here in this painting.

We love that more attractions are being celebrated during their anniversaries in puzzle form, just like when we spotted in May another Signature Puzzle featuring the Submarine Voyage, Monorail and Matterhorn Bobsled’s 60th anniversary in Disneyland.

Will you be bringing this ghost home to help celebrate such a beloved attraction?