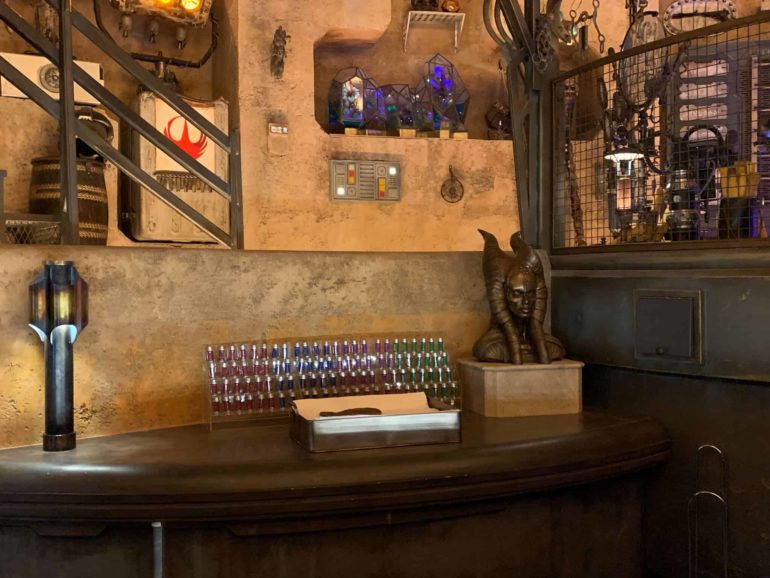 Just one day after the official (non-preview) opening day of Star Wars: Galaxy’s Edge at Disneyland, packaged kyber crystals had just about sold out at Dok-Ondar’s Den of Antiquities. Due to the shortage, kyber crystals were only obtainable at Dok-Ondar’s exclusively with the purchase of a Jedi or Sith holocron, by which guests received a blue or red kyber crystal, accordingly. (These reportedly came unpackaged as Dok had struck a deal with The Gatherers and obtained a small quantity of loose red and blue kyber crystals just for those who purchased the holocrons.)

Today, kyber crystals are back in stock at Dok’s:

It’s interesting to note that they’re also only available behind the counter, so people can’t rummage through them. (Many would hold their cellphone flashlights through the red cystal vials in search of black kyber crystals.) There’s also a purchase limit of one kyber crystal per color, per traveler. Each packaged kyber crystal sells for $12.99.

You no longer have to purchase a holocron to obtain a kyber crystal.

Over at Droid Depot, the popular Astromech Personality Chips for Build-Your-Own Droids are back in stock as well.

These personality chips unlock additional capabilities within your astromech droid, like different sounds.

We’ll keep an eye on the status of other shortages throughout Star Wars: Galaxy’s Edge, with Rancor Tooth Beer Flight Boards also reported as selling out. May the spires keep you(r favorite merchandise in stock!)

If you’re feeling nostalgic for Batuu (or have never been and would like a closer look) check out a full video tour of Dok-Ondar’s Den of Antiquities below!