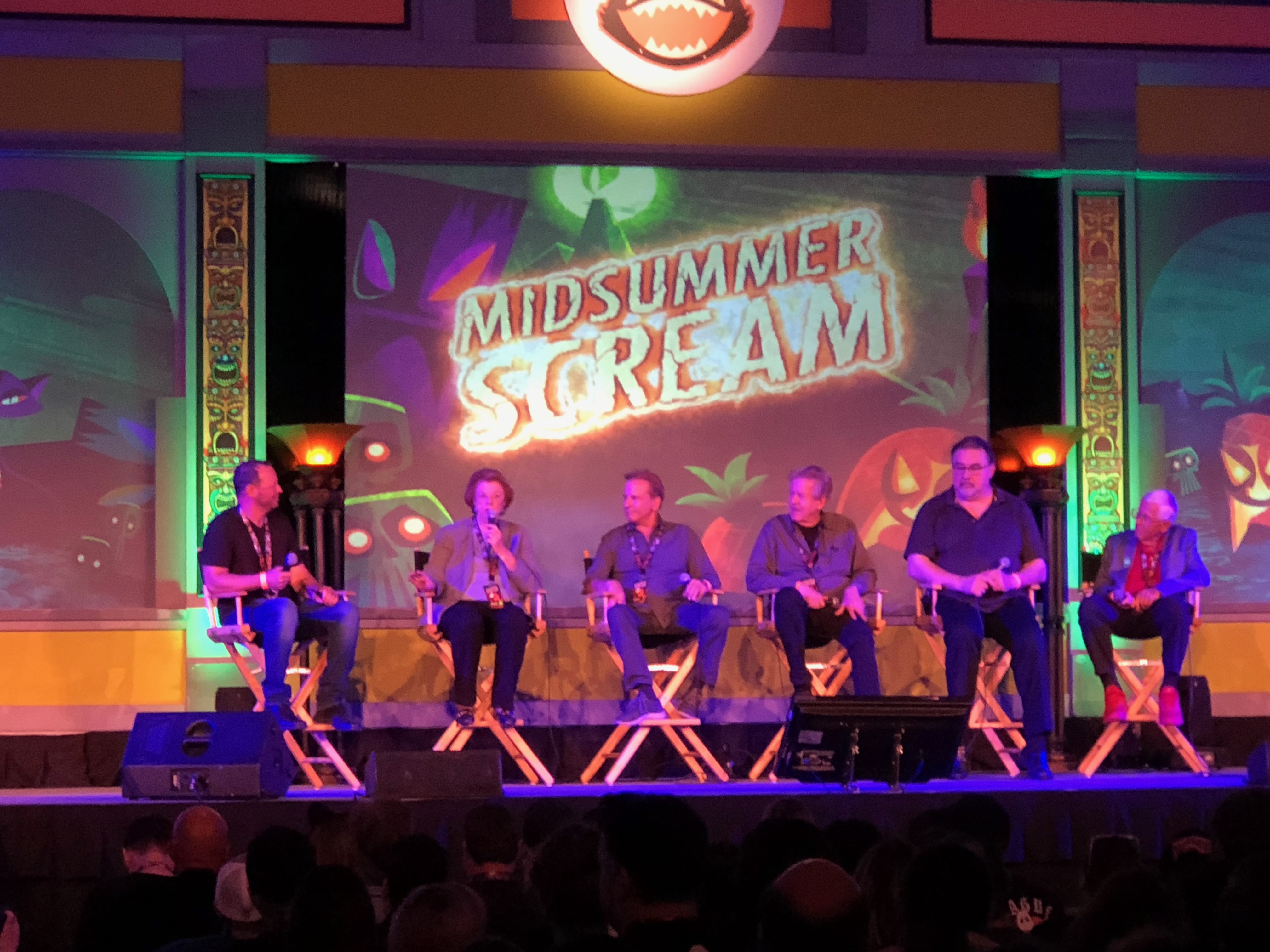 Not being an All Hallow Weiner myself, but a Haunted Mansion fan since even before it ever opened at Disneyland, I choose to made the dive into Midsummer Scream, arguably the nation’s largest Halloween Convention, held at the Long Beach Convention & Entertainment Center August 3 & 4.

The super popular yearly gathering exhibits all All Hallows’ Eve supplies and ephemera from over 350 vendors, as well as panel discussions on everything from campy Movie Monsters, to high-end costumes. And this year, a high-value discussion honoring the 50th Anniversary of the spooky landmark attraction that now exists, in some form, in Disney Parks around the world.

Of the several Haunted Mansion panels, we choose to attend the star-studded event on Saturday morning, which wasn’t as easy as it sounds.

The “packed-to-the gills” response to the discussion wasn’t terribly surprising because of the golden anniversary and the pedigree of the panel, hosted by Doug Barnes of The Season Pass Podcast. The Group included Disney Legends Tony Baxter (iconic former Disney Imagineer) and Bob Gurr (designer of the Mansion’s Doom Buggy ride system), American film producer and author Don Hahn (Beauty and the Beast, The Lion King, The Haunted Mansion), Tom Morris (former Creative Executive of Walt Disney Imagineering), and Tania Norris, who was hired by WED when the company employed less than 100 people, to be the interior designer of New Orleans Square.

“Everybody thinks that the Doom Buggies started with the Haunted Mansion,” Ride Vehicle Designer Bob Gurr pointed out when quizzed about the distinctive Haunted Mansion conveyance. “They were stolen,” he says, “from the Adventure Through Inner Space”, which debuted two years earlier.

He also maintained that the perceived privacy the Omnimover afforded on the Tomorrowland attraction introduced Park Operations “to a whole new side of Guest behavior.”

His defense was that he was hired “to design fun vehicles… and that, was a really fun vehicle!”

He also traced their development to work he’s done with John Hench on ride vehicles for the New York World’s Fair, and their observations of how a candied apple on a stick moved. Gurr said they realized they could direct the audience view to exactly what they wanted them to see. When the development of the Mansion shifted from a walk-through, the Doom Buggies were identified as the perfect ride vehicle for the show.

Tony Baxter, the former senior vice president of creative development of Walt Disney Imagineering, talked about the high anticipation of waiting years for the attraction to open. And the irresistibility of taking a peek at the progress as a young park Cast Member. He recalled being “mesmerized” watching tests of the still-becoming Madame Leota scene, until a Park Security Officer removed him.

He also recalled the short appearance of the legendary Hat Box Ghost at the time of the attraction’s premiere. And seeing the character during the first week of the show’s run. Before it… vanished. The character returned to the attraction several years ago, according to Baxter, partially at the behest of director Guillermo del Toro, who he says is “obsessed” with the character whose head alternately appears on top of his body, and in a hat box he holds.

Producer Don Hawn was a big fan of the Mansion as a young Southern Californian, who later in life, after working in Disney Animation, got the job as a producer of The Haunted Mansion live action horror comedy film released by Disney in 2003. He recalled being allowed to walk the attraction “with the lights on” one morning before opening and recalled it as “humbling” to see the simplicity and effectiveness of the ride’s scenes.

Hahn recalled shipping the Gracey Mansion staircase from the film to the then called Disney/MGM Studio Park after the film wrapped. He wanted it to be displayed on a soundstage at the park, because he thought it was a superb piece of movie set making, and couldn’t abide it being discarded.

Retired Imagineer and Show Producer for Fantasyland at Disneyland Paris, Tom Morris, who also worked as a young Cast Member, recollected uses that the physical mansion and the area destined to be the show building took on before the ride opened. He rightly calls this type of arcane research “the archeology of Disneyland.” “If you were backstage,” he said, “you might see people coming out of there.” He also recalled that the physical pad where the show building was to stand, once was the staging area for a park parade.

He highly discounted the stories of people being hurt or traumatized in attraction previews.

She made significant contributions during her nine years with WED Enterprises, supplying the interior designs for New Orleans Square, the Haunted Mansion, and the Plaza Inn Restaurant in Disneyland, as well as doing interior design work for some of the restaurants at Walt Disney World prior to its opening in 1971.

Her stories are also a bit less familiar than those of some of the well-loved former Imagineers and Studio Hands. So her recollections of Walt and Roy Disney, and their families and travels, did sort of “steal the show” at times during this panel.

She has said previously that when Walt Disney passed away, Roy Disney called various department heads for a “pep talk.” Reaffirming the vision and plans for EPCOT and other projects. She was the only woman in attendance.

She is well-known in art circles for her work and as a benefactor. She has donated rare botanical art texts and woodblocks to the Getty Research Institute where a Tania Norris Collection is maintained.