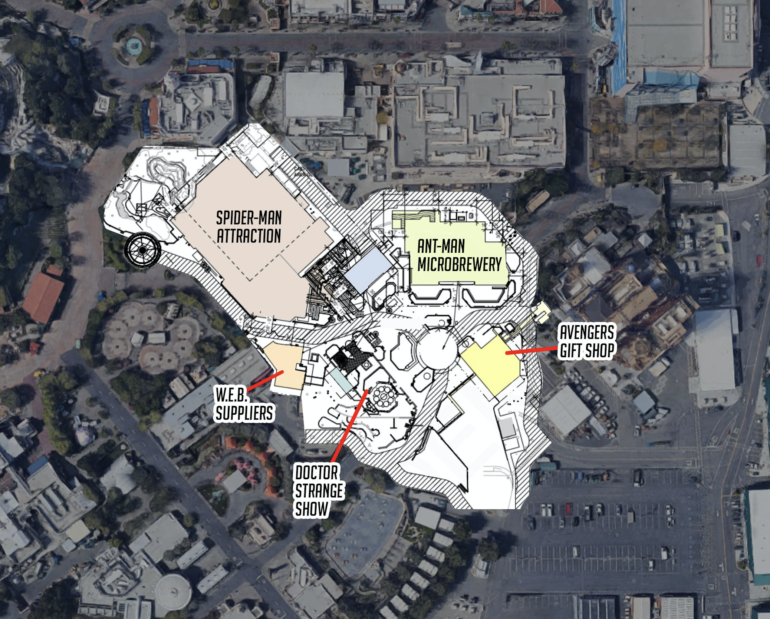 While we have already showed you the vehicles and load area for the Spider-Man ride, an in-depth look at the W.E.B. Suppliers shop, and a first-look at the Ant-Man Microbrewery, there’s still more to reveal about the Marvel-themed land coming to Disney California Adventure starting in 2020. Today, we’re taking a look at how all of this will be laid out within the park…

As you can see above, guests entering the land from the main thoroughfare of the park will cross underneath some sort of archway before walking the perimeter of the Spider-Man attraction show building. The land is also accessible from Cars Land and Hollywood Land, just as “a bug’s land” was.

The blue box in the art above is the former “a bug’s land” restrooms which will now be re-themed and reopened.

Other points of interest include W.E.B. Suppliers, located just across the path from Spider-Man’s attraction, the adjacent interactive Doctor Strange show, the Ant-Man microbrewery and restaurant, and the Avengers gift shop. This shop should eventually be at the exit of an Avengers E-ticket attraction set to open sometime later, but rumor has it that the original plans were scrapped. Supposedly, the attraction began with a new ride system concept, but Imagineers couldn’t come up with a story that worked with it.

This is also why there is no visible construction on the Avengers E-Ticket that was announced for Hong Kong Disneyland many years ago. Hopefully, a new attraction is in the works so we won’t have any more of these half-finished lands.