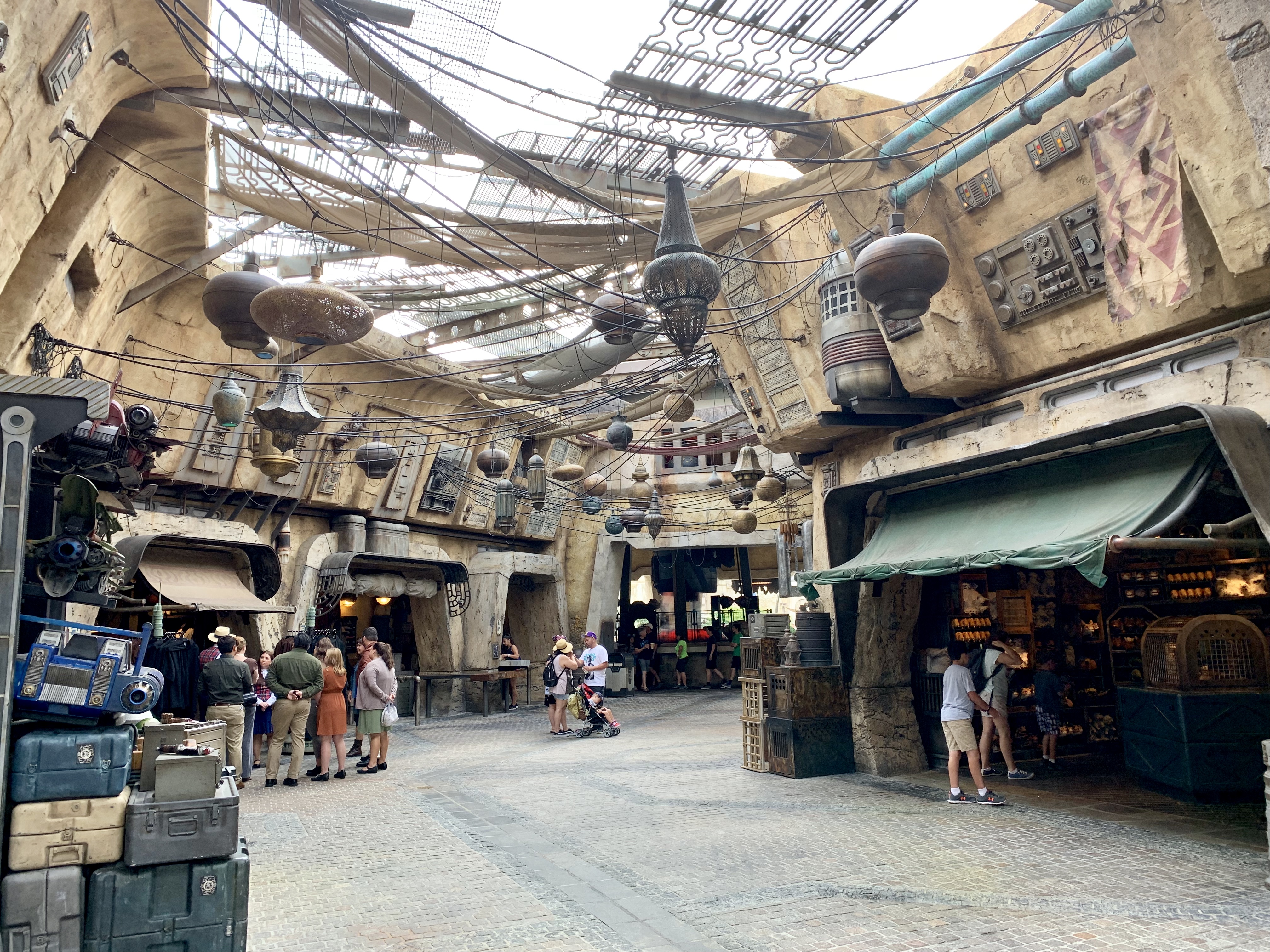 After Bob Iger recently discussed that Star Wars: Galaxy’s Edge may have caused lower than normal crowds this summer, we decided a trip to Disneyland Park was in order. While overall, the Park is far less crowded than past summers, the crowds are bound to pick up once Annual Passholder blockout dates are lifted at the end of the month. Here’s a look at the current situation at Disneyland Park, including Star Wars: Galaxy’s Edge crowds, new open edition Frozen Pins, and more!

This is a sight we never tire of: barely any lines at the Disneyland turnstiles.

There’s always a line of guests waiting for PhotoPass to take their pictures in front of the Mickey Mouse foliage. That’s something that hasn’t changed all summer, despite lack of large crowds.

Likewise, there’s typically always a line at City Hall, and this morning is no exception.

Nearby, we managed to catch Donald Duck performing with The Straw Hatters outside Disney Showcase.

Main Street, U.S.A. is looking a little busy as we make our way further into the Park and off to other Lands.

However, once we get past Main Street, the crowds are very light. All of Frontierland and New Orleans Square is empty and peaceful. These mornings are great for enjoying the atmosphere music and walking the Mark Twain Riverboat sail Rivers of America.

In Port Royal Curios and Curiosities, we spotted a new “The Nightmare Before Christmas” shirt. This one features Jack and Sally and is available for $24.99.

The Haunted Mansion is celebrating 50 years at Disneyland Park. This is a great week to enjoy the attraction, as the lines have been almost non-existent in the morning.

In celebration of the anniversary, black drapes have been added to the exterior of the Mansion.

The walk into Star Wars: Galaxy’s Edge from Critter Country is one of our favorites, due to lack of crowds.

Finally, the pin sets sold at Resistance Supply have been restocked after being sold out for a few weeks.

The Leia “Join the Resistance” magnet has finally been restocked, too.

And more Resistance keychains have been restocked.

As usual, we spot Rey greeting a few members of the Resistance.

The Marketplace is feeling very empty this morning, which makes checking out all the shops really enjoyable.

Even Savi’s Workshop isn’t looking quite as crowded at is has some days.

The Droid backpacks in Droid Depot were finally restocked for the first time since they sold out in June. However, they were only available for a few hours before selling out once more. And the Astromech Personality Chips are sold out again, too.

And the Milk Stand has a steady line of guests hoping to try Blue and Green Milk.

There was also quite the line this morning of guests looking to have their photo taken with the TIE Echelon.

On our way out of Star Wars: Galaxy’s Edge, we head for Fantasyland, where the crowds are at the lowest.

It’s a rare sight to see, but there aren’t a lot of people making their way through the Land.

Most of the people are, of course, in line to ride Peter Pan’s Flight. But the lines for the other attractions are very short.

We spotted Mad Hatter picking on a few younger guests outside of the Peter Pan’s Flight exit.

However, there is quite a crowd heading for Matterhorn Bobsleds.

We did want to take a ride on it’s a small world, but unfortunately, the guests were being evacuated from the attraction’s queue. Cast Members didn’t say why the ride was temporarily down.

Over in Mickey’s Toontown, Pluto and Goofy were seen doing a meet and greet together.

Meanwhile, the rest of Toontown was pretty dead. Not even Mickey and Minnie had a long wait for their meet and greet at their houses.

Finding Nemo Submarine Voyage had one of the shortest waits we’ve seen yet for this attraction.

As a whole, Tomorrowland wasn’t super crowded, which was nice!

A Cast Member posted at The Star Trader was having a lot of fun with a Mickey Bubble Wand and guests really loved it.

Over at Little Green Men Store Command, we spotted three new open edition Frozen Pins. The arrival of these is sure to get guests excited for the movie sequel, set to release this November.

On our way out of the Park, we noticed that Astro Orbiter had a short standby line. Since it reopened after a long spring refurbishment, this ride has been very popular, so it was strange to see a short wait.

Thank you for following along with our visit to Disneyland Park! Don’t forget to check us out on Twitter and Instagram for more coverage from Disneyland Resort.