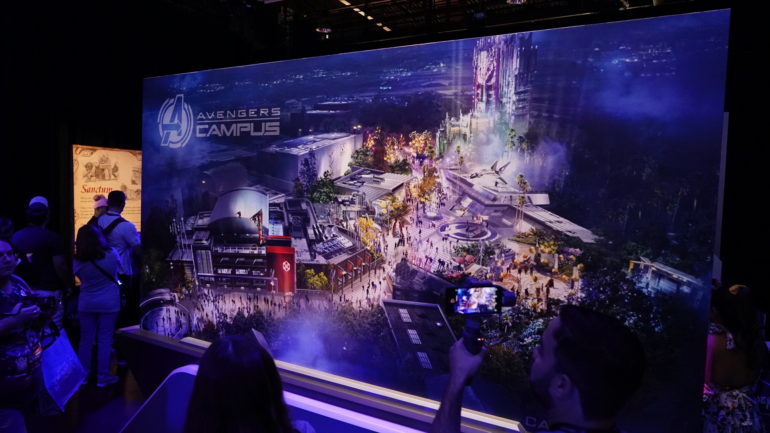 We’re about to become part of a bigger universe. Avengers Campus is coming to Disney parks around the world, and we have a look at the models and concept art that Walt Disney Imagineering is presenting at the 2019 D23 Expo.

With locations at Disney California Adventure and Walt Disney Studios Park, and the Stark Expo in Hong Kong Disneyland, Avengers Campus will bring some of Marvel’s most iconic superheroes to life in brand-new ways. And the best part is, there’s time stone needed to look into the future here! (So you can take off the quantum suit, there’s no time-heist today.)

First up is the site plan for Disney California Adventure. (Notice that it’s Project 1401, named in honor of 1401 Flower Street in Burbank, California, the home of Walt Disney Imagineering.)

There’s a scale model of the area (with a Tesseract-blue glow) showing the layout.

Above, you can see the footprint for the Spider-Man ride.

And here’s a quick look at the Hong Kong campus themed to the Stark Expo, which already features the Iron Man Experience and Ant-Man and the Wasp: Nano Battle.

Here’s a look at renderings and models for some of the elements you can experience at Hong Kong Disneyland.

Speaking of Ant-Man and the Wasp, the clues here suggest this may be part of the story behind the microbrewery and restaurant at Disney California Adventure.

I have to be honest: after a long day at the D23 Expo, I probably could eat a pretzel that size.

Here’s hoping those giant snacks are as tasty as they are big.

Moving into the rest of the Anaheim campus…

It looks like there’ll be plenty of heroes running on rooftops… here’s hoping they can spend some time with their legions of fans.

So here’s a breakdown of what the Marvel Theme Park Universe will look like: Avengers Campus will be taking residence at Disney California Adventure and Walt Disney Studios Park, with the Stark Expo being the equivalent in Hong Kong Disneyland. Meanwhile, there will be a Xandarian outpost at Epcot where the Guardians of the Galaxy will reside, as well as Marvel presences in Shanghai Disneyland and on Disney Cruise Line.

Now it’s time to hop on the Quinjet and see what Avengers Campus will look like in Paris.

Here’s the concept art for Disney California Adventure that was released late on Friday, blown up to a large scale.

People seem to enjoy the displays… hands down. (Sorry for the bad pun.)

(It does look like fun to let out your inner Tony Stark, though.)

From Queens to Anaheim and Paris, it looks like our friendly neighborhood Spider-Man will be looking good when he rolls up to Avengers Campus.

And here’s a better look at the logo for WEB, the Worldwide Engineering Brigade.

Here’s a look at a Spider-Bot, which will likely play a role in the attraction.

And here’s what the Spidey-Suit will look like when the wall-crawler arrives.

And finally, it looks like Taneleer Tivan, aka The Collector, will try to make his collection part of Avengers Campus. Of course, the Guardians of the Galaxy may have other ideas…

He’s even brough a Vyloo to the Expo as a gesture of good will. That can’t go wrong… right?

And that concludes our tour of the Avengers Campus part of Walt Disney Imagineering’s exhibit! Will good prevail in this land of heroes? Stay tuned to WDWNT for all the latest news, true believers! Excelsior!