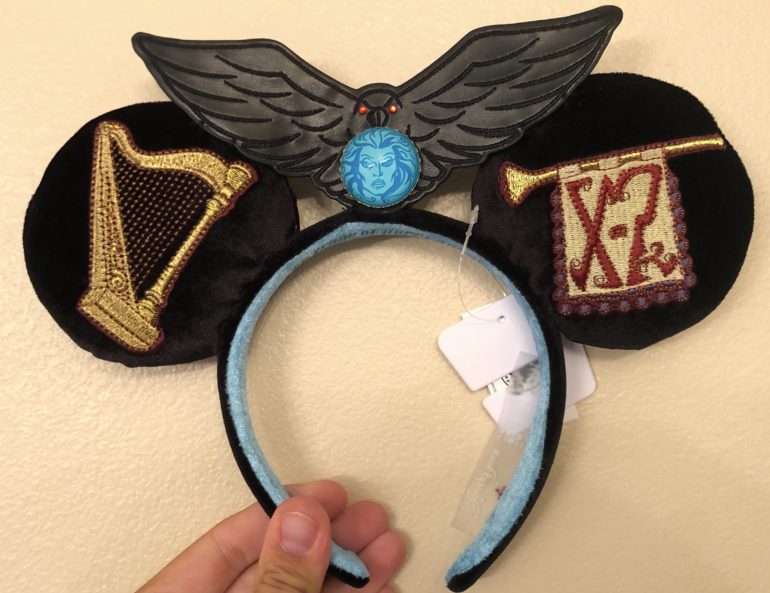 From the Disney Parks Designer Collection comes the Haunted Mansion 50th anniversary mouse ear headband created by Walt Disney Imagineer, Kim Irvine, who’s best known as the Art Director of Disneyland Park and the face of Madame Leota in Haunted Mansion Holiday. The ears are reversible, with the front featuring none other than Madame Leota herself! We were able to snag these ghoulish beauties early during tonight’s swinging wake.

This design was made available early to purchase tonight at Disneyland’s “The Haunted Mansion: Celebrating 50 Years of Retirement Unliving” event and the sold-out “Disney Villains After Hours” at the Magic Kingdom in Walt Disney World.

The headband features velvet ears with embroidered patches inspired by elements from the Séance Circle scene, as well as ghost-inspired art from Disney Legend Claude Coates, printed on the back. A faux leather embroidered raven with wings spread, and red gem eyes sits between the themed ears just behind a replica of Madame Leota’s crystal ball.

Like all Designer Collection ears, they come in this souvenir, velvet-lined box. The ears retail for $78.00 and will be available at Disneyland Resort on Aug. 9, Walt Disney World Resort on Aug. 10 and online at shopDisney.com on Aug. 12. Now, look alive!