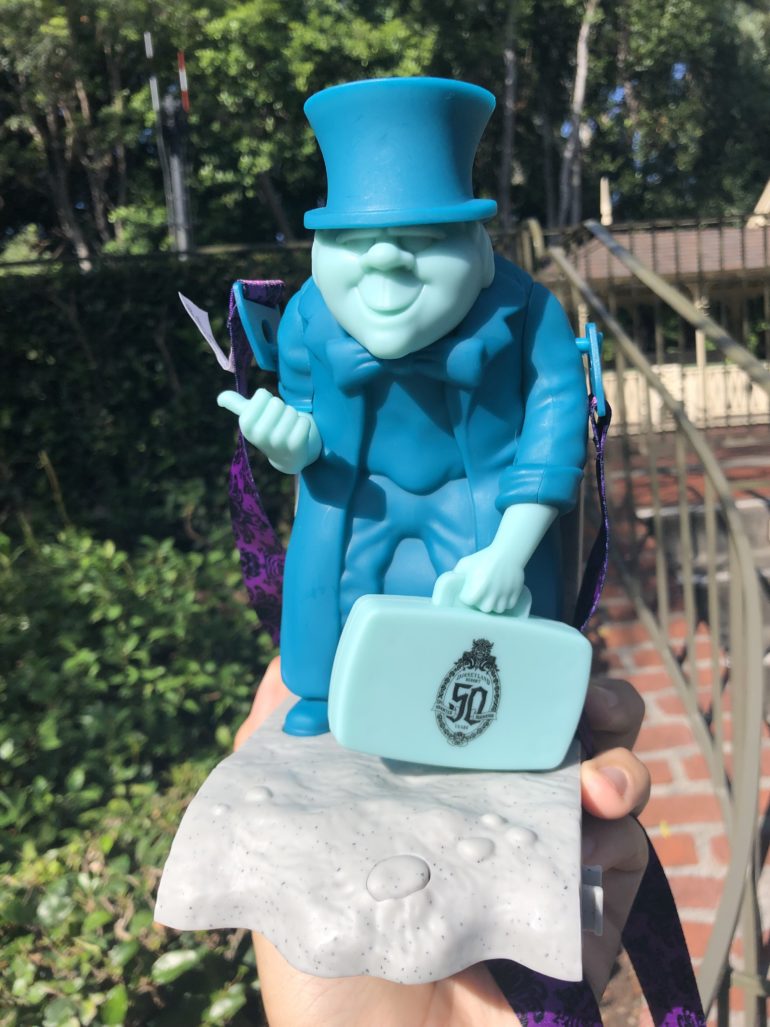 Going our way? If you’ve got popcorn, just hop on the doombuggy, bud. Professor Phineas Plump of Hitchhiking Ghost fame is trying to make his way back to the graveyard and he’s got a tombstone full of popcorn to get him there. To commemorate the 50th anniversary of The Haunted Mansion at Disneyland, they’ve released this new popcorn bucket, as if there wasn’t enough merch out already!

The buckets are available at the cart just outside of the Haunted Mansion. They retail for $20.50 and include a serving of butter popcorn at time of purchase.

Over on the back, you’ll notice his custom tombstone. “His travel plans have hit a bump…”

It’s interesting to note that this is the first popcorn bucket that’s essentially designed to hold a carton of popcorn instead of the popcorn itself.

Disney’s finally caught on that none of us enjoy having to wash out these babies once they’re coated in greasy butter. However, there’s more to it than that…

If you noticed over on the front, one of the rocks is slightly bigger than the other, and looks like a button. There’s also a green light-up nub behind the briefcase. See that hollowed out tab on the left hand side? We’ll get to that shortly.

The popcorn bucket lights up and plays “Grim, Grinning, Ghosts”! It stays on while the switch is on, making this a great Halloween or Haunted Mansion room decoration when not in use. That makes it almost better than the Host-A-Ghost Jars.

Will you be hitching a ride over to Disneyland for one of these buckets? You’d better hurry, because if you couldn’t tell, this is actually one part of a three-part connecting set. We’ll have the next piece up soon!