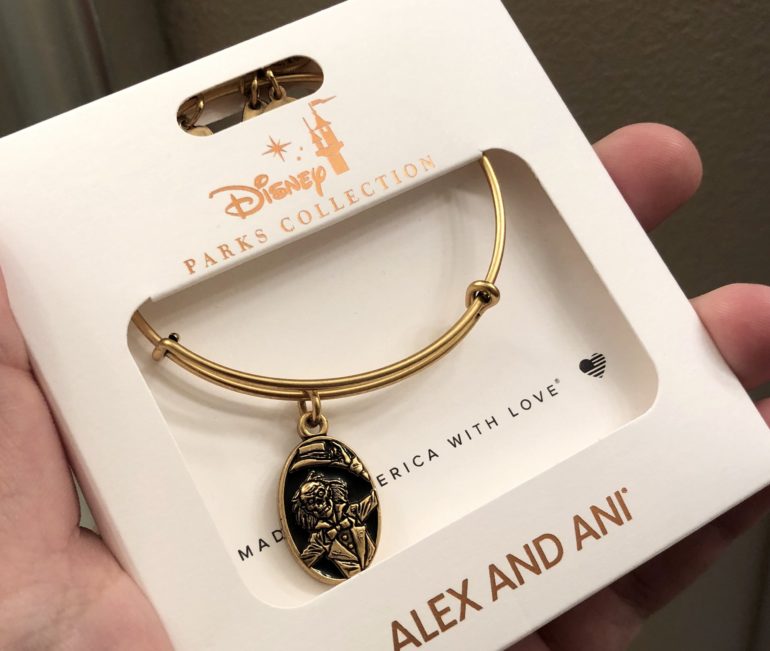 Gold, grinning ghosts come out to socialize! Of course Alex and Ani had to get in on the Haunted Mansion 50th Anniversary action. They’ve released their very own bangle bracelet just in time for the swinging wake!

The bracelet features Ezra of Hitchhiking Ghost fame, tipping his hat in an ever so cordial fashion. The backlaid black enamel really lets the vintage gold shine through.

Lately, all of the Alex and Ani releases have been depressingly void of any fun designs or cameos on the back of the bangle chamrs. Thankfully, this one has a great back to it. It says “50 Years of Happy Haunts” with the silhouettes of a singing graveyard bust, a creepy crawly, and a bat.

The Disney Parks exclusive retails for $49.99 and will be available at both Disneyland and Walt Disney World Resort starting tomorrow for the Haunted Mansion 50th Anniversary festivities.

As a reminder, guests at the Magic Kingdom are actually being granted early admission starting at 7:45 AM to the Haunted Mansion 50th shopping event, with exclusive access to the attraction at no cost.