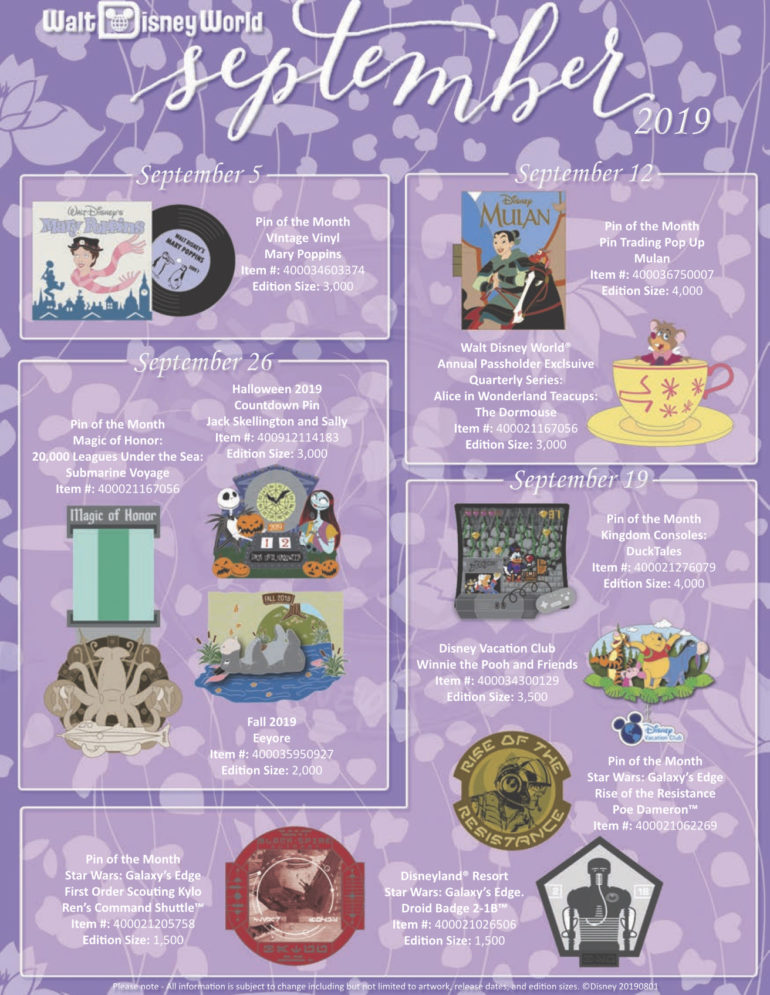 Disney Pin Collectors and Traders, get ready to start planning which of September’s pin releases you’ll be adding to your ever-growing collection. There’s a wide variety of pins here, including the Pins of the Month, Disney Vacation Club exclusives, and Star Wars: Galaxy’s Edge pins! Take a closer look below.

Starting September 5, we have the Vintage Vinyl featuring Mary Poppins. We’re super excited for more Mary Poppins’ merchandise, especially after the D23 announcement of a Mary Poppins attraction coming to the United Kingdom. Next up, we have the Pop Up Mulan trading pin, featuring our favorite heroine as Ping.  For Annual Passholders, the quarterly series features Alice in Wonderland’s teacups and the Doormouse. You might recognize him from popping up from the giant tea pot at the Mad Tea Party at Magic Kingdom. The next pin in the Kingdom Console is DuckTales… Woohoo! Disney Vacation Club members get to return to the Hundred Acre Woods with Winnie the Pooh and Friends with this exclusive pin. With Star Wars: Galaxy’s Edge opening up tomorrow, we’re seeing a few Pin of the Month and even a Disneyland Resort one for this new land. The first one features the highly anticipated ride, Rise of the Resistance and our favorite rebel, Poe Dameron in the center. There’s also the First Order Scouting Kylo Ren’s Command Shuttle pin, which looks like a scene from our macrobinoculars. Disneyland Resort also has a Droid Badge, featuring the surgical droid, 2-1B. The end of the month features some favorites, like the Magic of Honor, honoring the 20,000 Leagues Under the Sea: Submarine Voyage attraction, featuring the Nautilus and the giant squid they face. We also see Eeyore enjoying Fall 2019 as he floats on down the stream. We also have a spooky countdown to Halloween with the residents of Halloweentown, Jack Skellington and Sally.

Here we have a better look at some pins, including some for Disneyland Resort. On the top left, we see the latest Windows of Magic, featuring Sorcerer Mickey. Next to it features the Crests of the Kingdom featuring the Mad Tea Party. There’s also a few more Galaxy’s Edge limited edition pins. With the Skyliner opening later in Septmber, there’s a few limited edition open release pins and a limited release mystery pin collection, featuring eight unique designs mirroring the artwork on the gondolas in the sky. Disneyland also has a limited edition, Annual Passholder Donald Duck pirate pin as well.