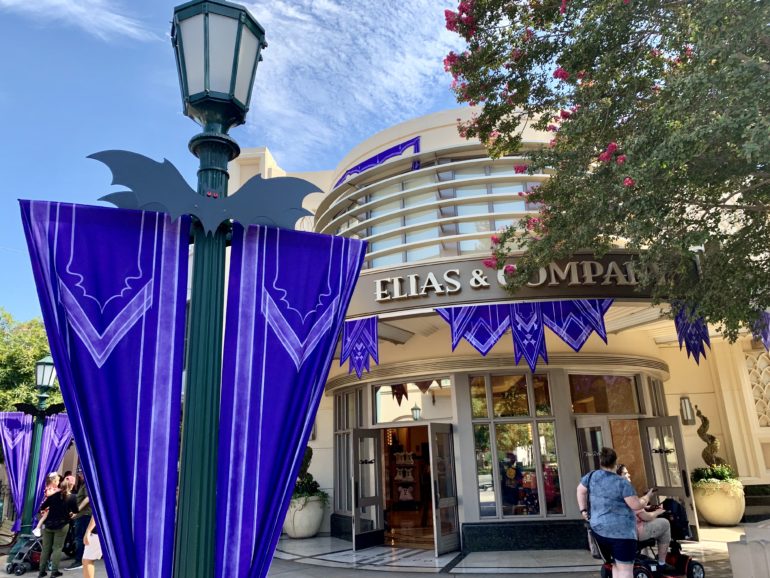 Halloween time is just about to kick off at the Disneyland Resort, so we decided to squeeze in a morning Park visit before the craziness tomorrow. Follow us along through Disney California Adventure, where we found a new Tiana Alex and Ani Bangle, checked out the early Halloween decorations, and more!

The Red Car Trolley Station on Buena Vista Street is still under refurbishment, with the area blocked off by construction walls.

To counter the unpleasant view of the construction walls, Halloween decor has gone up along Buena Vista Street.

The purple really stands out against the neutral color of the buildings.

The Headless Horseman hasn’t made his appearance yet, but a spot has been made for him just outside Elias & Co.

Inside the store, the new Sith Trooper merchandise to hit the Resort is on display.

And a new Tiana Alex and Ani Bangle has finally made its way to Disneyland Resort after debuting in Walt Disney World last week! This gorgeous two-sided bangle costs $49.99.

The Guardians of the Galaxy: Mission – Breakout! entrance and FastPass distribution kiosks are still blocked off by construction walls.

This area will probably be blocked off due to the construction of Avengers Campus before it opens next year.

The Cars-inspired Halloween movies posters have returned once again.

The Cozy Cone Motel cones are decorated with jack-o-lantern faces.

The fourth cone hasn’t received a spooky face yet, but should be ready by Friday.

Luigi’s Casa Della Tires is already in the spirit of the season.

Even Stanley is getting his witch on!

Overall, the crowds in the Park are really low––despite all Annual Passholders being unblocked. We’re not sure if Halloween time will change this at Disney California Adventure, but we’re enjoying a quiet Pier today.

And once again Mr. Potato head is down. This is the first time he’s been down for a few months, which is a nice change from the usual.

Over at Silly Symphony Swings, conductor Mickey is still missing from the top of the attraction.

Plaza de la Familia is returning once again to Paradise Gardens Park and the area is just about ready for the festivities on Friday.

Signs have been put out that explain the history of Dia de los Muertos.

The Tree of Life hasn’t been set up just yet.

Neither has the gazebo nearby.

Further down Paradise Gardens Park, The Lion King merchandise has been replaced with Halloween merchandise.

And despite “Tale of the Lion King” ending on September 2, there are still banners out along the walkway.

But the show stage has been removed completely from the Palisades Stage area.

We spotted another mobile vendor cart stocked with merchandise outside of The Little Mermaid Ariel’s Undersea Adventure.

And before heading out the Park, we spotted Chip and Dale entertaining guests outside of Redwood Creek Challenge Trail.

Thank you for following along with our day at Disney California Adventure. Be sure to check us out on Twitter and Instagram for more updates from the Disneyland Resort!