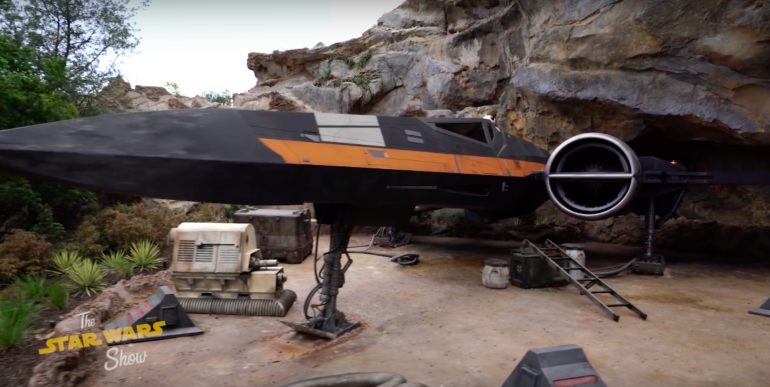 It’s been a good week for sneak peeks. Just this week, we’ve been able to snag a peek at the upcoming Guardians of the Galaxy: Cosmic Rewind attraction vehicles, an adorable new Pascal animatronic for the upcoming “Tangled” boat ride in Tokyo DisneySea, and now… a look at Poe Dameron’s X-wing, straight from the Rise of the Resistance queue in Star Wars: Galaxy’s Edge:

Poe’s black and orange X-wing sits right at the entrance of the caves, deep within the Resistance Forest.

Aerial view of the Resistance base in Star Wars Galaxy's Edge. Very little can be seen in the guests areas open now. Zoom in and you can see an X-wing at the cave. Attraction opens Dec 5, entrance at the grey blasters near center. pic.twitter.com/H9M2N55BGG

In this aerial shot of Star Wars: Galaxy’s Edge in Disney’s Hollywood Studios by Twitter user @bioreconstruct, you can see the X-wing over in the top center, slightly off to the right.

And what’s that over by the cockpit?

That’s right, BB-8 will be interacting with guests in the queue as they wind their way through the forest and into the attraction’s loading area. Much like all of the other ships scattered or parked throughout the land, there’s the possibility of Poe himself potentially coming out to tinker with his X-wing or fix it when it’s in need of repair, just like Rey and Chewie do.

You can view even more shots of the X-wing, plus get the latest Star Wars news, in the latest episode of The Star Wars Show: