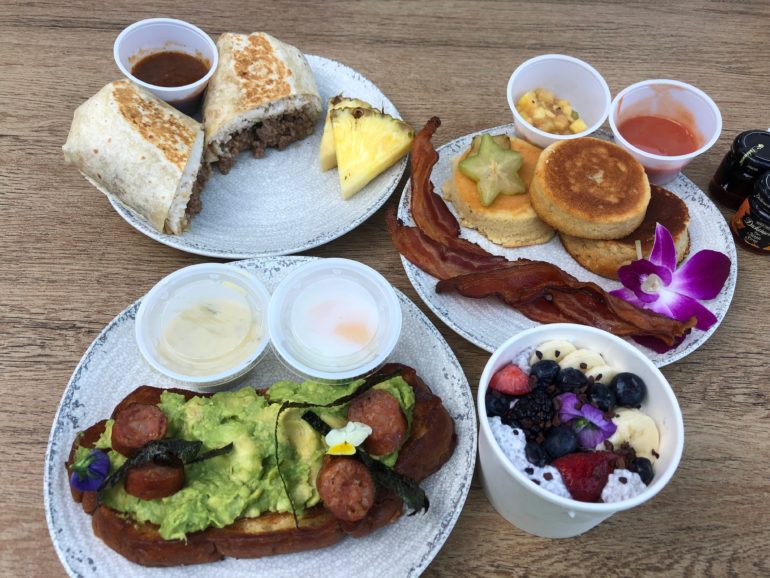 Currently breakfast runs from 7am-11am daily. The line did get backed up on a weekday but they offer mobil order. We opted for mobil order.

Just be aware that if you mobile order your food will come prepackaged in to-go containers. The cast members were nice enough to hand us some plates so we could attempt to make our plates look as pretty as the menu. It would be nice if they mobile order gave you the option for “to-go” or not.

We enjoyed these, but they were not by any means the best pancakes I’ve ever had. They were definitely thick, and had a nice vanilla taste to them, but using the word “fluffy” is a bit of a stretch. The presentation is beautiful and the fruit compote was nice.

Neither of us are big guava fans so we didn’t love the guava syrup which luckily came on the side. There are a variety of real maple syrup and “fake” syrup inside so we enjoyed these with the real maple syrup just fine.

As a local I probably wouldn’t come back here for these but if I were staying at a hotel nearby these would be a solid choice. The bacon was a nice compliment to add some protein.

We were definitely intrigued by this one. As fans of the Hawaiian staple loco moco, this could go either way. Thankfully it was good.

It doesn’t look overly appetizing but the flavors were on point. The ratio of rice/meat/gravy was right on. A dabble of the salsa added just enough extra flavor to make this really good. The toasted tortilla gave it the added crunch it needed.

The portion was fairly generous so this could be easily split. One nitpicky point was that the eggs got buried so each bite didn’t always have eggs. We also struggled to find the crispy onions but didn’t find that we missed them either.

We think kids and parents alike would be happy with this choice which can be taken on the go in a pinch.

This was the sleeper of the group. We were not expecting anything outstanding and this was by far our favorite.

The presentation, even in the to-go container was still beautiful. And at only $8 this was a large portion that will keep you full for awhile. The fruit was super fresh and just ripe enough. The chia seed pudding had a subtle coconut aftertaste but mixed in well with the acai blend.

Usually everything at Disney tends to be way too sweet but this was perfect. I’ve certainly spent more on an acai bowl that tasted half as good as this. As a locol I absolutely would come back and grab this on my way into the park, especially for the price. Give this one a shot.

We were very excited for this. And sadly, it was the most disappointing thing we had. Overall it just lacked flavor and texture. Creamy avocado mixed with creamy hollondaise and creamy egg just make for mush. The avocado smear seemed to have no additional flavor added and it needed salt. We’re assuming the nori and Portugese sausage should have added the salt flavor but since the nori was plopped on in such huge chunk it overpowered any bite it was in.

The menu says “thinly” sliced sausage. We’re not sure what Disney’s definitely of thinly is but these were giant chunks. We think this could quickly be improved with some salt and cutting up the nori and sausage so it gets incorporated into each bite. Also the Hawaiian toast under was a bit too thick. It was hard to cut and too dry for the ratio of toppings.

It may have just been an off day for this and if you love avocado toast perhaps you’ll have more luck but for now we’ll be sticking to that burrito or acai bowl. Which of these are you going to try next time you’re there?