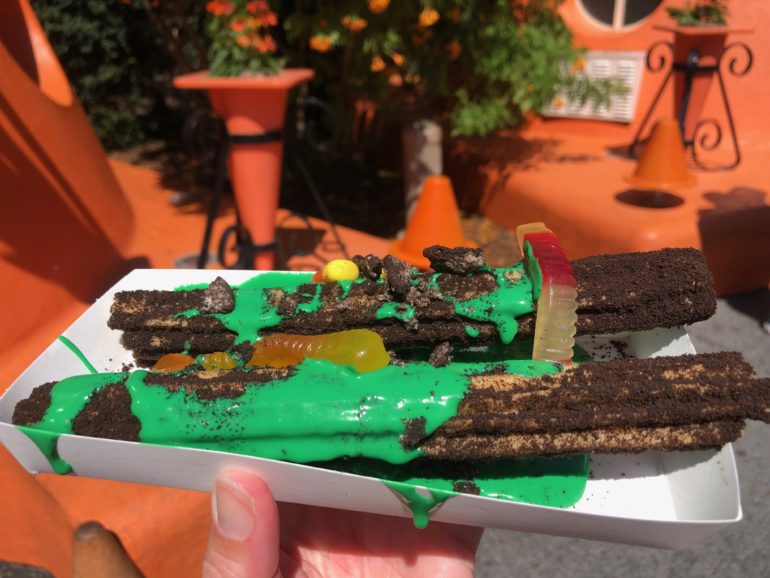 The spell is cast and it’s time to get your snack on at Disneyland Park and Disney California Adventure. Today marks the start of Halloween Time at the resort, and what’s any holiday at Disneyland Resort without specialty foods? Over in Cars Land, the Cozy Cone Motel has three offerings, including a new churro.

Last year, they had the pumpkin spice churro here, but this year, Cars Land was deemed worthy enough for its own Halloween churro. Or maybe Disney just wants more of our money. Here, you’ll find another sugar bomb of a churro covered in Oreo dust, gummy worms, and more green frosting goop.

This tastes exactly how it looks. This is your standard Disneyland churro dusted in Oreos and topped with green frosting. It oddly enough doesn’t taste as sugary as it looks, but it is still a sweet extravaganza. We saw several kids really enjoying this, but be warned that the green frosting will get everywhere and turn your hands, phone, and everything else green. This is one of the better “chocolate-coated” churros we have had, but ultimately we liked the S’mores Churro better.

This favorite is returning this year and it is easy to see why. A macaron filled with marshmallow buttercream and candy corn.

This is super sweet, but I really enjoyed it, especially when I would find a hidden piece of candy corn in a bite. The marshmallow cream is rather pleasant between the two soft pastry pieces. Personally, this is a must-order for me.

I wish this would stay all year long, because it is fantastic. A spicy version of the solid Disneyland counter service mac and cheese with a lot more flavor from red pepper cheese sauce. The bread cone wasn’t bad, either.

Overall there are several solid options over at Cozy Cone to be sure to swing by before they are gone. Which of these beauties will you be trying?