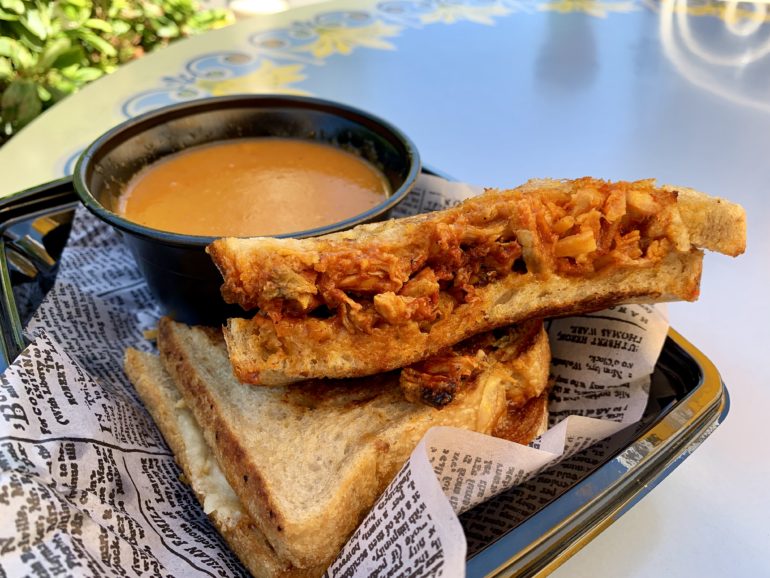 A mac and cheese dish in Cars Land, several new straws, mugs, and popcorn buckets, and churros from Main Street to Pixar Pier. Halloween Time at Disneyland Resort has evolved well beyond candy and fancy costumed characters. From September 6th through the actual Halloween, anywhere you go, in every land throughout either park, you will see, feel, and surely taste the latest seasonal influence. For the most specialty items with the least amount of legwork, head into Jolly Holiday Bakery Cafe, where novelty confections are the order of the day.

They offerings are sweet, sugary, and distinctly dessert-oriented. If you’re passionate (obsessed) enough to try them all, perhaps augment your surfeit of snacks with a nice palate-cleansing sandwich. Collectively the Jolly Holiday Halloween Time assortment is a fine, whimsical compliment to the quality, more permanent menu. Individually, each is a well-conceived, if not universally delicious, addition to the seasonal showcase.

Let’s get this one out of the way first. Then we can get on to the items we truly enjoyed, and Disney fans will forgive us this singular trespass. I feel comfortable blaming Starbucks, but the sweet-pumpkin sensation may have run its course. At any rate, on its own, and absolutely as a member of the Jolly Holiday holiday lineup, this one belongs at the bottom of your list, if it appears at all.

It’s not too harsh to say this is not a Disney-worthy example of either a pumpkin dessert or of cheesecake. There are numerous better examples of each, even from Jolly Holiday itself. The tastes don’t blend in this particular treat, nor does either standout in a palate-pleasing fashion. Plus, pretty much everything else is just way better. Moving on..

This is not a pastry for which you ought to forgo dinner, but if this creative concoction does not remind you of your grandmother’s sweet potato casserole, then you owe her an apology. Okay, it’s a little light on the advertised pie filling, but the toasted mini-marshmallow topping will have you longing for a home-cooked meal. With the orange and white chocolate glaze, it’s an arguable improvement over that dish you silently resented when grandma would give you thirds.

One might say its a tad dry, and the flavor possibly falls a bit short, and it only fits the very loosest of definitions of pie. From imperfection comes character, and don’t let grandma hear you complaining as such.

Speaking of family holiday traditions; who among us has not passed over bundt cake in favor of anything and everything else? Well, perhaps give the Disney Halloween Time version a chance. It has more flavor than any cake not attached to the words chocolate and lava, and is far more moist than most suspects in its class.

The “spice” is primarily cinnamon, and blends well with the vanilla cream, marshmallow, and subtle lemon flavors. Indeed, if it wasn’t bathed in and filled with the above elements, it would be as uninspiring as most other bundt cake. But, this is Disney, and it comes bathed, and it’s really quite good as a result.

This location’s crown jewel in terms of taste and creativity. It starts with a brownie, so, awesome that. Then it’s all dolled up to look dalmatian-esque with black dark chocolate and white chocolate mousse. It comes in a spotted black and white cup, which the incredulous might suggest looks more cow than dog-like. Still, it’s precious and delicious. Capping off your new favorite dessert is a white chocolate wafer donning an intricate Cruella de Vil likeness.

This one’s rich, and admittedly may not be the single best brownie you’ve ever had. In concert with the two-toned mousse, though, you’ll never appreciate another brownie that comes without it.

This is a treat in search of an identity. I refuse to believe a chocolate cupcake with cherry filling, dark chocolate mousse, whimsical sprinkles, and chocolate Rest-In-Piece tombstone is not entirely wonderful. Since I was essentially sampling these items in the order they appear here, I, at this point, had admittedly had more than a fair share of cake, including what had to be a hazardous amount of sugar. Were I keen enough to try this after the pumpkin cheesecake, or at least not directly after the amazing brownie, I suspect I would appreciate it more. As it is, it’s charming, and tasty, but all I really wanted at this point was a salad and a treadmill.

The crowd favorite for those not properly captivated by the Cruella de Vil Brownie. If you already like macarons, as you should, and if a fan of cookies-and-cream flavoring, and who isn’t, the Mickey Mummy Macaron is to die for. If you aren’t stopping after the brownie, you likely aren’t going to give this masterful delicacy its due. If you are a cookies and cream and/or macaron connoisseur, get this one first, or even exclusively.

The buttercream filling is exquisite, though it’s difficult to tell whether one ought to be impressed more by the taste or craftsmanship. Both are noteworthy, and worth more consideration than I was able to afford it. I love macarons. I love cookies and cream, especially in frosting fashion. Were I of a more sound mind I think I would want these at my wedding. In the throes of a chocolate-scented pulmonary episode, I’m just pleased I was able to snap a few pictures before passing out bodily into my plate.

This is by far the best sandwich I’ve ever eaten at Jolly Holiday. The soup is hot temperature-wise and it’s spicy! You could probably eat 1/3 of it before the spiciness becomes too much, but it’s so good. The sandwich is huge and stuffed with so much chicken, making this dish feel like a steal. The sandwich is amazing when dipped in the soup, but it’s also great by itself. The chicken isn’t dry at all, probably thanks in part to the salsa roja.

The pumpkin muffin is a solid choice and one of their better muffins. The top of the muffin is firm and crisp, while the bottom half of the muffin is super soft and moist. It’s baked perfectly! The cream cheese topping is great too because it makes this feel like a cupcake more than a muffin. The pumpkin flavor isn’t super overpowering, so any level of pumpkin lover can easily consume this. It feels more like a dessert than a breakfast item, though, so keep that in mind if this is your first meal of the day.