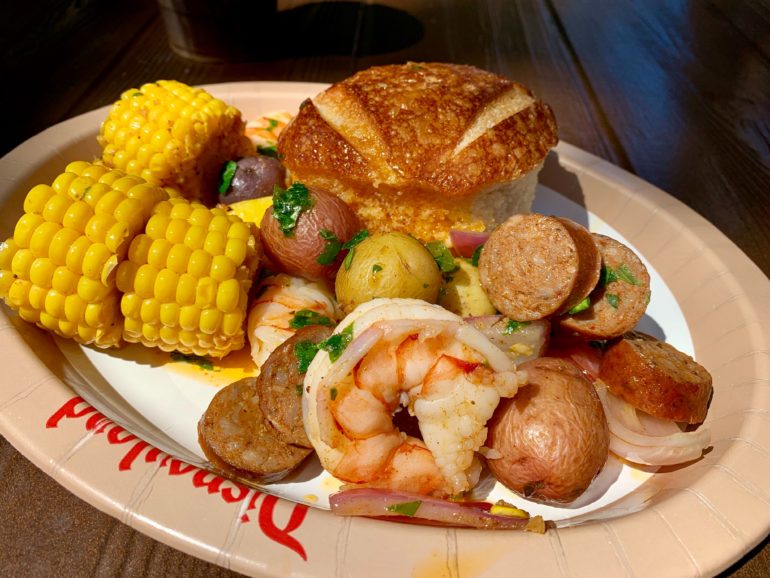 Welcome, foolish mortals! It’s time to take a visit to Harbour Galley in Disneyland’s New Orleans Square to check out their contributions to Halloween Time 2019: The Ghost Mariner’s Seafood Boil and 13th Hour Brew. Both are not only here to celebrate Halloween Time, but also the 50th anniversary of The Haunted Mansion.

Let’s start with the 13th-Hour Brew. This iced coffee is weird. The cream is very thick; it’s not quite like foam, but it’s a heavy cream that’s a little more solid than liquid.

The coffee itself is really strong and bold in flavor. As someone who loves black coffee, this is still too strong for me and I wouldn’t order it again. But if that’s what you’re into, then it’s fine. It might be better if you mixed the cream into the coffee, though.

Moving on to The Ghost Mariner’s Seafood Boil; the boil is good, but small for the price. The shrimp and sausage are seasoned really well, as are the vegetables. They aren’t spicy, but they do have a kick. Other than the big chunk of bread, the plate is very small.

Be sure to check out our other reviews of Halloween Time offerings around the Disneyland Resort, including Haunted Mansion tacos and a Spider Silk sandwich!