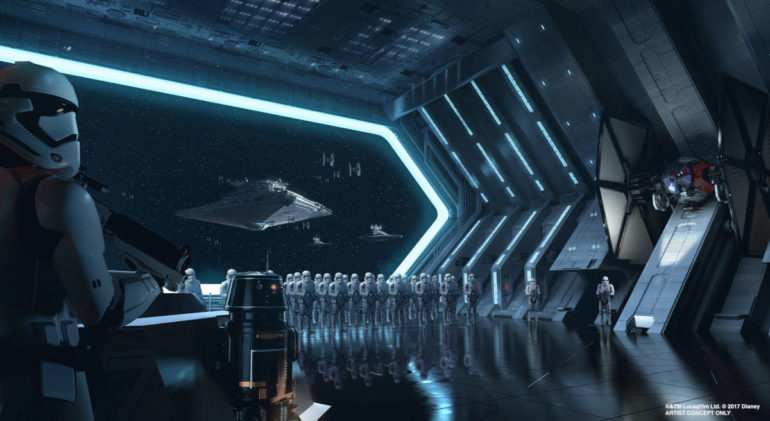 Star Wars: Rise of the Resistance will take guests on a heroic mission for the resistance given by none other than Rey (Daisy Ridley). However, the First Order is always around the corner and expect no less here as the task is intercepted with the likes of full size AT-ATs and an intimidating amount of Storm Troopers determined to shut down the mission at any cost.

We see John Boyega and Oscar Isaac (Finn and Poe Dameron) talk about the experience we’ll have alongside their characters during the epic adventure as we try to escape from The First Order. A side view of Ridley (Rey) is seen giving the details of the mission that guests will undertake while riding. Bob Chapek and executives involved with the creation of Star Wars: Rise of the Resistance give us insight into the storyline and the thrills and obstacles that will be all part of the experience while on the run from the First Order, including “Storm Troopers everywhere and lightsabers coming at you.”

Star Wars: Rise of the Resistance opens December 5, 2019 at Walt Disney World and January 17, 2019 at Disneyland so we don’t have too much longer to wait! Did you watch the two-hour special? Are you excited to experience this cutting edge attraction? Let us know your feelings below.