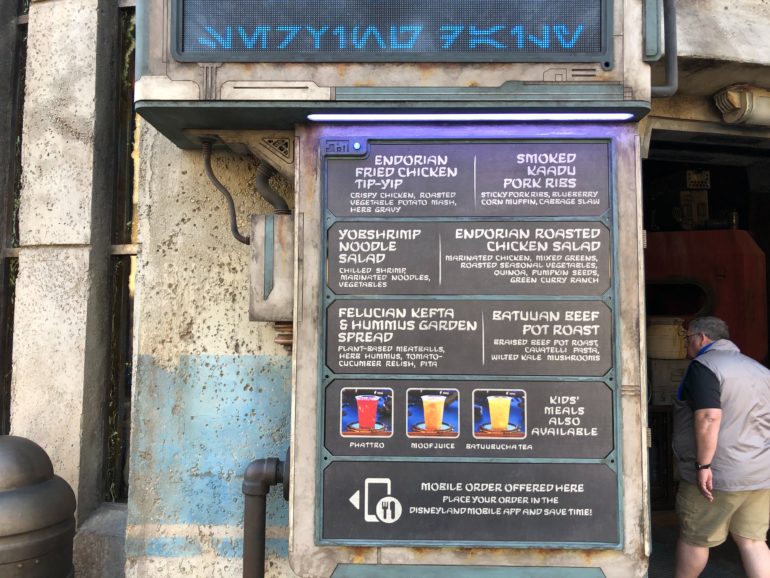 The saga that is menu item name changes has made its way west to Docking Bay 7 Food & Cargo in Star Wars: Galaxy’s Edge in Disneyland.

The changes attempt to satisfy both the need to clarify menu items for guests and the desire to keep the immersive experience of Batuu. These item names mostly align with the recent name changes to Docking Bay 7 Food & Cargo’s east coast counterpart in Disney’s Hollywood Studios.

Like in Disney’s Hollywood Studios, the Shaak Roast has been renamed the Batuuan Beef Pot Roast, and the main ingredients have been added the other names, like Smoked Pork Kaadu Ribs, Fried Endorian Chicken Tip-Yip, Endorian Roasted Chicken Salad, Felucian Kefta Hummus Garden Spread, and Takodana Veggie Dippers. The most noticeable differences are that Disneyland’s version of the restaurant retained the name of the Yobshrimp Noodle Salad, as opposed to changing it to Surabat Shrimp & Noodle Salad, as Disney’s Hollywood Studios did, and the Garden Patty Bun has become the Ithorian Garden Patty Bun. (That’s adding a thematic element where there previously wasn’t any, so it’s a big win for immersion!) No changes have been made to the breakfast menu item names.

Another big difference between the changes at Disneyland and at Disney’s Hollywood Studios is that as of the writing of this article, Disneyland’s Ronto Roasters has not received any menu item name changes.

Earlier in October, the menu item names at Disney’s Hollywood Studios’ Docking Bay 7 Food & Cargo were changed to severely downplay the immersive names they had at opening, before restoring the original names, and then finding the middle ground between clarity and immersion. (Yes, you can now shout in your best Obi-Wan Kenobi voice, “It’s over, Anakin! I have the middle ground.”) During this period, Disneyland’s Docking Bay 7 Food & Cargo did not receive any changes to menu item names, but it seems that the winds of change have finally arrived.

Keep reading WDWNT and Disneyland News Today for updates on all changes at Star Wars: Galaxy’s Edge in Disneyland.

REVIEW: Power Up the Hyperdrive For The New Chocolate Popcorn with Crait Red Salt at Kat Saka’s Kettle in Star Wars: Galaxy’s Edge in Disneyland